About unofficial variants of the Argentine flag

The most common change to the flag is to change the sun for another symbol, or to add texts in the flag. This is absolutely unofficial, as the Argentine Flag should not have any texts or inscriptions in the field of the flag at all.

The inscriptions like name of a school, or government branch should go in the "corbata" or ribbon. The only Argentine Flags that could have writing in the field of the flag are Military War Flags (with the name of the force in the upper stripe like "Ejercito Argentino" (Argentine Army), "Fuerza Aérea Argentina" (Argentine Air Force), etc. and the name/number of the unit in the bottom stripe, like "1er Regimiento de Infantería" (1st Regiment of Infantry) or something like that. Both text appear forming arches.
Francisco Gregoric, 11 November 2005

This is the most used Argentine flag during the FIFA World Cup.
Gastón Abriola, 27 November 2002

"Vamos" literally means "Let's go". However in a sporting fan context, I suppose an approximate translation for "Vamos Argentina" could be something like "Go Argentina!".

This expression "Vamos Argentina" has an additional meaning here (in Argentina), because that phrase is part of the chorus of the Mundial '78 (FIFA World Cup 1978 played in Argentina) official song.

This flag has then a "football (soccer) context". In fact these "Vamos Argentina" flags were sold a lot during the last 2002 World Cup.
Francisco Gregoric, 26 July 2005

Watching the Argentina v. Brazil qualifying match for the World Cup this evening, I noted an unusual flag carried by the Argentine supporters. It was the standard Argentine bicolor, but instead of a golden sun in the center, this flag featured a black and white football.
Ron Lahav, 9 June 2005

An incorrect report of an irredentist Argentine flag of the Falklands is exposed.

However such a flag (similarly designed) is shown at the Rapiarte flag company website http://www.rapiarte.com.ar/: It shows an Argentine triband with the Falklands outline in black.

Even if this is a "fabrication" or even a "honest mistake" made by Rapiarte, since they are selling such flags, I guess they do exist, however unofficially.
Antonio Martins, 26 Jul 2005

Yes this model of flag does exist. However this flag is not intended for the islands as a kind of "legal sub-division". At least, not in an official and legal way by the Argentine government or state.

This model of flag (there is also another variant with the map shown in the same light blue shade of the upper and lower stripes of the flag), is a non-official variant of the Argentine Flag. This particular variant is usually used and raised by veterans of the Malvinas War of 1982. It could be classified as a "non-official variant of the Argentine flag" or "flag usually raised by war veterans". Sometimes in meetings or commemorations of war veterans, this flag could be seen.

This flag shown in Rapiarte could have a political meaning and emotional impact or feeling really different than the variant of an Argentine flag with a football (soccer) ball instead of a sun used by sports fans in a stadium, but from a legal point of view, both are non-official variants of the Argentine flag in the same way the Peace symbol U.S. Flag is a non-official variant of the U.S. flag.
Francisco Gregoric, 26 July 2005 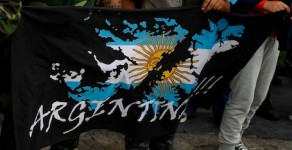 A black-field flag/banner with the blue-white-sun colors of the Argentina national flag redesigned in the shape of the U.K.-held Falkland Islands with a white "Argentina" at the bottom, as displayed by Argentine veterans of their short 1982 ​seizure of the isles; c. 2016.
Bill Garrison, 5 April 2022

Other unofficial variants of the flag

Or in Marxist leftist political meetings non-official "variants" of the Argentine flag with the portrait of Ernesto Che Guevera or a five-pointed red star instead of the sun. Again each different symbol gives a different meaning to the whole flag.
Francisco Gregoric, 26 July 2005