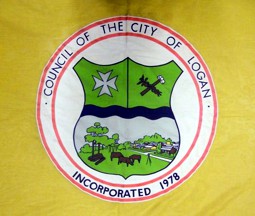 Logan City Council covers an area to the south of the city of Brisbane in southeast Queensland. The city and the Logan River take their names from Captain Patrick Logan, one of the founders of the Moreton Bay penal settlement (now Brisbane). Logan Shire was created in 1978 from the northern parts of Albert and Beaudesert Shires and declared a city in 1981. In the 2008 local government changes, the area was extended southwards.

The picture of a yellow flag bearing the city emblem seems to come from the Logan History blog, http://loganhistory.wordpress.com/qr-codes/logan-city-flag, which tells us that the flag used to be hoisted outside the front of the old
Springwood Library.

The emblem, adopted in late 1980, is described in the council document City Insignia, found at http://www.logan.qld.gov.au/__data/assets/pdf_file/0014/7340/richinhistory-cityinsignia.pdf. It consists of a shield in a white circular border with the inscription "COUNCIL OF THE CITY OF LOGAN. INCORPORATED 1978"

The shield is divided by a wavy blue bar, representing the Logan River, which was roughly the city's southern border before 2008. Above this are two sections with green fields" dexter, a light blue Maltese cross (as in the state badge) taken from the arms of Beaudesert Shire and sinister a brown and white hammer crossed diagonally with a brown caduceus (Mercury's staff of commerce and communications) taken from the arms of Albert Shire. These symbols show the historical link with Albert and Beaudesert Shires.

Below the bar is a landscape in blue, green, yellow, brown and black illustrating the area's history in timber cutting (trees and logs) and dairying (cow), merging into its urban future (urban area). It includes a surveyor's tripod and theodolite, representing the early exploration of the area.

The symbol is used as council's formal civic emblem. The council also has a logo, a flower in the City colours of royal blue (stem and 5 leaves) and gold (four petals). Another page, http://www.logan.qld.gov.au/about-council/our-organisation, indicates that this is indeed a representation of the City's floral emblem, Banksia integrifolia, that is, the Coast Banksia, or commonly known as the Honeysuckle Oak, typical in the native vegetation. They say "The tree can grow up to 12 metres in cultivation and flowers regularly through out the year. The flower is orange-yellow and is suitable for flower arrangements and popular by nectar feeding birds".

The flag with emblem may not be in use any more. A media release, http://www.logan.qld.gov.au/about-council/news-and-publications/media-releases/media-releases/state-of-origin-logan-city-vs-parramatta-city, discussing mayoral wager around the rugby league State of-Origin series involving the winner's city flag flying at the loser's buildings shows the mayor with what could be a white flag with the Banksia logo above the words "LOGAN CITY COUNCIL".
Jonathan Dixon, 17 August 2012