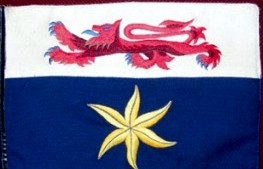 The flag is a banner of the municipal arms of Hobart, supporters and crest excluded, which are presented on the town's official website as follows:

The Coat of Arms was formally granted to the Lord Mayor, Aldermen and Citizens of the City of Hobart on 1 May 1953. A copy of the Letters Patent granting the Coat of Arms is displayed in the vestibule of the Town Hall; the original document is held by the Archives Office of Tasmania.

The Coat of Arms was designed in 1951 by Hobart architect and alderman, I.G. Anderson, and replaced an earlier unofficial crest, used by the Corporation since the 1850s. Alderman Anderson was largely instrumental in encouraging the Council to request the Arms. The motto 'SIC FORTIS HOBARTIA CREVIT' is featured on both the Coat of Arms and the earlier crest.

The arms are blazoned and explained as follows:
Shield.
Azure an Estoile Or on a Chief Argent a Lion passant Gules. The star is derived from the arms of Lord Hobart, 4th Earl of Buckinghamshire (1760-1816), Secretary of State for War and the Colonies at the time of colonial settlement (1804), and after whom Hobart is named. The colour used on the arms of Lord Hobart was, in fact, sable (black), rather than blue. The red lion is from the Tasmanian flag - and its location at the top of the shield signifies Hobart's position as the Capital City.

Crest.
On a Wreath Argent and Azure A three masted sailing Ship (representing the Flying Childers) in full sail Or, Mantled Azure doubled Or. The helmet is associated with civic heraldry and is often used for municipal authorities. The ship was a whaling ship, built in Battery Point in 1846, and signifies the importance of shipping and whaling to Hobart's industrial and economic development.

Supporters.
On the dexter side an Emu and on the sinister side a Kangaroo both reguardant and each gorged with a chaplet of Apples leaved all proper. The Tasmanian Emu (now extinct) and the Forester Kangaroo (endemic to Tasmania) are references to the Council's unofficial crest, used from the 1850s, and also provide a connection with the Australian Coat of Arms (granted in 1912). The animals have collars to deliberately distinguish them from the national coat of arms; the apples signify the importance of the apple industry to the state - known commonly for many years as the 'Apple Isle'.

Base. (not described)
The base of the shield is a green island, alluding to Tasmania, and the blue wavy lines represent the surrounding seas. Growing upon the island are two examples of native flora, the Richea (or Flowering Grass Tree), which grows on the slopes of Mount Wellington and the Tasmanian Waratah.

Motto.
Sic Fortis Hobartia Crevit
The motto, Sic fortis Hobartia crevit, or "Thus in strength did Hobart grow", was part of the Council's old Common Seal and was retained when the new Coat of Arms was introduced. It was first used by the Rev. Robert Knopwood, in his diary at the end of 1804, literally translated by Knopwood as, "Thus by industry Hobart Town increased." The motto is derived from another commonly used motto "Sic fortis Erutria crevit" - used in Book Two of Virgil's 'Georgics' - Etruria was an important area of central Italy inhabited and governed by the Etruscans. This motto "Sic fortis Erutria crevit" was used in relation to the Colony of New South Wales from 1790.
http://www.hobartcity.com.au/Council/About_Council/Hobart_Coat_of_Arms
Ivan Sache, 24 April 2012 This venerable Regatta has been held there every year since 1838 (except for 1967 when the infamous bushfires ravaged Hobart). Given Tasmania (then the colony of Van Diemen's Land) was only settled in 1803, 'the Regatta', as the locals call it, has been an institution from the early days of British settlement. Started by the then Governor of Tasmania, Sir John Franklin, both as a free exhibition of aquatic competitions and displays and relaxation for the citizens, it is the oldest Australian public holiday. A three day event, it is still free. It even lays claim to being 'the largest aquatic festival in the Southern Hemisphere'. And how we 'southerners' cherish it (the 'northerners' of this fair island don't get the holiday - they instead have Recreation Day in November!). There are races for rowing [...] keelboats [...], power boats, jet skis, dragon boats [...], outrigger canoes, swimming (including the prestigious 1.6 km Trans-Derwent swim) and a fishing competition.

The blog features a photo of the flag of the Royal Hobart Regatta Association, which is white, quartered by a red cross, in the middle, the association's emblem, in the respective quarters the red letters "R", "H", "R", and "A".
Source: http://www.lifeonplanetbaby.com/2011/02/lets-attend-royal-hobart-regatta-2011.html
http://www.sail-world.com/index.cfm?Nid=93871&refre=y&ntid=0&rid=8 - another photo of the flag

The emblem of the Royal Hobart Regatta Association is made of the red letters "RHRA" surmounted by a crown, surrounded by two vertically divided white-red-white pennants crossed per saltire under branches of oak and of ?, all over a red scroll inscribed "EST. 1838" in black letters.
http://www.royalhobartregatta.com/Program.pdf (no longer available

On the flag, the crown appears in a different patterns and the scroll is omitted.
Ivan Sache, 8 June 2012