I am trying to identify a shipping company from it's house flag. The flag is white having a red cross in saltire with a solid diagonal blue square superimposed upon it. The illustration I have I estimate as being mid 19th century.
Tony Burton, 29 June 2004

The eleventh company on the BIShip page about companies affiliated with the British India Steam Navigation Co. is Archibald Currie & Co. (purchased 1913). (I think “Archo.” above is a typo for “Archd.”).

White flag with red saltire, a blue lozenge placed over it in the centre. Jorge’s version has the lozenge large, the BI site small. Lloyd's Flags and Funnels [ll012] shows it large again, bolstering up Jorge’s version.

The founder’s biography at the Australian Dictionary of Biography describes the company as having a small but excellent fleet and famous for transportation of horses.
Jan Mertens, 18 January 2007

AMPOL, now a trade name, was originally an acronym for Australian Motorists PetrOleum Ltd, which was originally established to supply petroleum and associated products to AMPOL branded petrol stations, later taken over by Caltex (now Chevron). It was at one time listed on the Stock Exchange. At some point it also established an oil search company, Ampol Exploration, which was later separately listed on the Australian Stock Exchange.
https://en.wikipedia.org/wiki/Ampol
https://parlinfo.aph.gov.au/parlInfo/search/display/display.w3p;query=Id%3A%22media%2Fpressclp%2FHNC082015120463%22;src1=sm1
Philip Miller, 21 October 2020 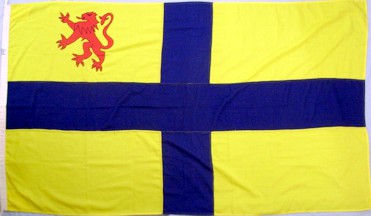 Associated Steamships Pty. Ltd. was formed in 1863 by the merger of McIlwraith McEacharn Ltd. and The Adelaide Steamship Co. Ltd. interstate shipping interests operative 1 January 1964, becoming a management company in the 1970s and known as ASP and the forerunner of the current company of the name. The flag as shown by Marine News 7/1970 was yellow with a blue cross and in the canton a red lion rampant.
Neale Rosanoski, 20 October 2008

We concur with Neale Rosanoski’s observation about the house flag of Associated Steamships Company Limited. Recently the museum has received a flag that came from MV Kooringa, a container ship built at the State Dockyard Newcastle for Associated Steamships and launched in 1964 and possibly the first vessel built by the newly merged entity.
Bill Storer, 29 January 2015
Collection Manager
Newcastle Maritime Museum