Opposition Groups/Parties on this page:

Anti-Government Militia Groups on this page:

Official political parties are illegal in Behrain, although the government does authorize certain political societies and associations that are Pro-governmental. Never-the-less, oppositional forces do exist within Bahrain and demonstrate against the government.
Pete Loeser, 19 June 2022

This yellow flag is a party flag, however this picture is only a part of its flag, and even the picture is mirrored. The al-Wafa'a Islamic Party is a new unregistered group without parliamentary seats in Bahrain.
The Shia opposition grouping Wafa'a (means "loyalty") is competing with an older radical group for the leadership of the minority of Bahraini Shia who oppose participation in parliament. It poses little threat for the foreseeable future to Wifaq, the mainstream Shia opposition party. During the first months of 2009, the temporary detention of Haq's leaders left a leadership vacuum among Bahrain's Shia rejectionists. Abdulwahab Hussain, a once-prominent Shia activist who had kept to himself for over eight years, re-emerged as the center of the "Wafa'a" movement.
Its home page: http://www.al-wafa.org/
Its Facebook page: https://www.facebook.com/alwafa.party
Party flag is yellow with its logo, and full Arabic and English name placed under the logo. The logo itself is a calligraphic composition of letters of the name: al-Wafa'a.
More images:
http://sphotos-f.ak.fbcdn.net/hphotos-ak-ash3/565010_460061124032029_913397696_n.jpg
http://sphotos-g.ak.fbcdn.net/hphotos-ak-ash4/247670_486579084709207_1836032681_n.jpg
Zoltan Horvath, 01 November 2013

This Black and White version of the national flag is said to represent the Bahraini Shias a minority group that have been underrepresented for many years.
The Sunni-dominated monarchy and elite, has often been in opposition to the Shia majority of the population. Bahrain's Sunni and Shia citizens have often diverged sharply in their attitudes toward Iran's policies and proxies in the region.
Pete Loeser, 25 May 2022

The Shia insurgency in Bahrain is an ongoing insurgency by Shia militant groups, supported by Iran, which attempts to topple the Sunni minority government of Bahrain. The insurgency began in 2011, after the crushing of the Bahraini uprising of 2011.
It seems no revolution can be complete or legitimate if it doesn't raise a flag of its own. The Bahrain "revolution" now uses this flag.
The green symbolizes Islam, truth and peace and prosperity; the yellow symbolizes life, energy, struggle and honor; and the white represents purity, light and truth. Red is the color shimr and yazid raised against Imam Hussain.

This flag should not to be confused with to the Flag of the Ochoz u Brna village in the South Moravian Region of the Czech Republic. The only difference between the two flags is the Czech flag is without the gold outline of the 5 trangles in the design.
Pete Loeser, 25 May 2022

Coalition Youth of 14 Feb Revolution, sometimes called "The Coalition" is a Bahraini youth group, named after the date of the beginning of Bahrain's uprising, and led by anonymous individuals who organize protests chiefly via media sites.
Pete Loeser, 19 June 2022

The National Liberation Front - Bahrain is a communist party in Bahrain. It was founded on 15 February 1955, the first leftist party in the Arab states of the Persian Gulf.
Pete Loeser, 19 June 2022

The National Democratic Labour Action Society - Wa'ad (Founded 2002 - Banned 2017) was Bahrain's largest leftist political party. It emerged from the Popular Front, a radical clandestine opposition movement of socialist and Arab nationalist orientation. Under the reform process initiated by Bahrain's King Hamad, the leaders of the Popular Front returned from exile to participate in the political process through the National Democratic Labour Action (NDLA).
The party's origins lie in the split within the Left in the Arab world in the 1960s, between a pro-Moscow camp and a pro-China camp, with the NDLA's leaders backing Beijing. The party is the first licensed political group in any of the Arab states of the Persian Gulf.
Pete Loeser, 19 June 2022

The Bahrain Freedom Movement (Harakat Ahrar al-Bahrayn), founded in 1982 is a London-based Bahraini opposition group which has its headquarters in a north London mosque. The BFM played a leading role in the 1990s uprising in Bahrain. The BFM Voice of Bahrain website was blocked on the orders from the Bahraioni Ministry of Information.
Pete Loeser, 19 June 2022

The Haq Movement for Liberty and Democracy is an opposition political organization in Bahrain founded in November 2005. Haq opposed participation in parliamentary elections because it considers the 2002 Constitution of Bahrain to be illegal. They feel, correctly, it was unilaterally imposed by King Hamad ibn Isa Al Khalifah to replacing the true 1973 Constitution.
Pete Loeser, 19 June 2022 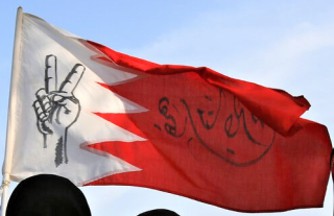 Bahraini anti-government protesters (Shia-Muslims) carry a national Bahrain flag with a resistance symbol and an Arabic-language phrase: "we will not accept humiliation," at a march organized by opposition groups in A'ali, Bahrain, April 18, 2014. (AP Photo/Hasan Jamali). While Bahrain's Shia-Muslim population makes up about 70% of the native population, the country is ruled by a Sunni-Muslim monarchy.
William Garrison, 24 October 2021

At Terrorism Information Organization: Bahrain Subversion and Terrorism Groups is a graphic showing flags of the five main Shia-Muslim, Iran-affiliated organizations/militias of the Islamic Resistance (or Palestine Liberation Movement to oust Israeli occupation) in Bahrain. They include: the al-Mukhtar Brigades, the Popular Resistance Brigades, the al-Ashtar Brigades, the Wa'ad Allah Brigades, and the Thaer Allah Brigades.
The politics of Bahrain are rather complicated. It has a Sunni-Muslim monarchy that rules over a mostly Shia-Muslim population. Although these five groups support the return of displaced Palestinians to all of Israel, these majority-Shia groups are also opposed to the minority-Sunni government. Although suppressed by the government, they operate discreetly throughout Bahrain.
However, things may become more explosive now that the Sunni-Bahrain government has recognized the Jewish state of Israel in Sept. 2020, in direct conflict with Shia-Iran.
Admittedly, the 5-flags photo looks rather photo-shopped, with the flags having all of the same folds in them at the same time - or there was a nice steady breeze. And besides, I just cannot image these opposition flags being allowed to be so brazenly flown somewhere within Bahrain.
Bill Garrison, 12 January 2021

Inside the above "source" there is a PDF (see the icon/button: "Full document in PDF format") that (between pages 16-21) identifies each flag below.

The logo of the al-Mukhtar Brigades has similarities to the logos of the IRGC and Hezbollah. The red map at the left includes Bahrain and part of Qur'an Sura 9, al-Tawbah, verse 14, "Fight them. Allah will punish them at your hands..." (website of al- Marja for the study of Islamic movements, August 20, 2018).
Bill Garrison, 12 January 2021

The al-Ashtar Brigades
"Citizens for Behrain"

A logo similar to that of the IRGC and of Hezbollah in Lebanon. Both logos have Qur'an Sura 47, Muhammad, verse 7, "O you who believe! If you support Allah, he will support you, and will strengthen your foothold" (website of the al-Ashtar Brigades).
Bill Garrison, 12 January 2021 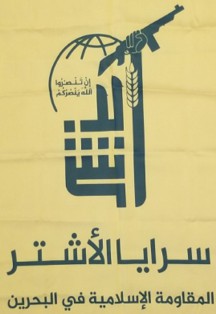 The logo of the Thaer Allah Brigades is similar to the logos of the IRGC and Hezbollah (al-Sharq al-Awsat, November 24, 2018).
Bill Garrison, 12 January 2021