Meaning and origin of the flag

The three stars in the centre of the flag officially refer to the three words in the national motto, “Unité, Travail, Progrčs” (French for “Unity, Work, Progress”). The three stars are also said to represent the three ethnic groups who live in Burundi, the Hutu, Tutsi and the Twa.  Burundi has a similar ethnic mix to Rwanda and has similar political and ethnic problems. The Twa are a pigmy race. The red in the flag stands for the independence struggle, the green for hope and the white for peace.
Stuart Notholt, 12 Mar 1996

Whitney Smith (1980) also suggests the possibility of the Burundian flag being based on the former Sabena airline flag, but he also says that there is no proof of that.
Željko Heimer, 02 Aug 1996

Use and Specifications of the flag

According to Flags and Arms across the World by Whitney Smith (1980) civilians have the right to display this flag on holidays only. Otherwise the flag is used as a state flag and a military flag on land while the President of the Republic has right to use a flag on buildings.
Željko Heimer, 13 Mar 1996

Colour approximations given in Album 2000 are:

Construction sheets for the Burundi flag can be found here.

One should note that the shade of green in the flag of Burundi is considerably lighter than those in the flags of Burkina Faso and Bulgaria (as shown in Album 2000).
Željko Heimer, 09 April 1996

The protocol manual for the London 2012 Olympics (Flags and Anthems Manual, London, 2012) [loc12] provides recommendations for national flag designs. Each National Olympic Committee was sent an image of their flag, including the PMS shades, by the London Organising Committee of the Olympic Games (LOCOG) for their approval. Once this was obtained, the LOCOG produced a 60 x 90 cm version of the flag for further approval. So, while these specifications may not be the official, government, version of each flag, they are certainly what the National Olympic Committee believed their flag to be.

The official construction sheet for the current flag is provided here.

The Flag in the Constitution 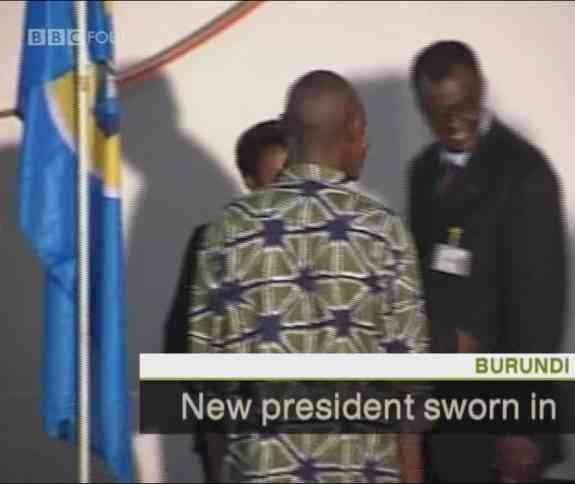 Unlike the initial information that this would be the flag of the political party called Unité, this is the flag of the National Unity and is a recognized national flag,  agreed together by all the ethnic groups in the country to be used alongside the national flag.  I believe that there never was a party called UNITY but only a flag called "drapeau de l'unité".  Unité is an institutional agreement (pact) between the three ethnic groups created from initiative of the then President Buyoya prior to 1993.  Following this agreement free elections were organised and the first Hutu president (from FRODEBU) was elected.
Jaume Ollé, 28 Feb 2005

"The World" on BBC4 TV (26 August 2005) carried a short report about the swearing in of the newly elected President of Burundi. A brief clip showed him passing by a blue flag (see here).   It is clearly a darker blue than the drawing shown above.  It can also be seen at www.burundi.gov.bi/presi.htm

That this is indeed a recognized national flag and not a political flag (in the sense of being the flag of a political party) is confirmed by a Chinese news agency report which includes the sentence: "The new president received in turn from his predecessor the constitution, the national flag, the unity charter, the national unity flag, the national logo and the "intahe" (in Kirundi) - a stick that is the symbol of power and fair judgment" [my emphasis].
André Coutanche, 28 Aug 2005

The flag without stars

It seems that the stars are used by Tutsi extremists to back up their claim that the Tutsis are descendants of ancient Jews.  They link the Tutsi to the Kushi and the ancient Kushit state ruled by the Queen of Saba; the Tutsi Judaism would pre-Talmudic, like the Judaism of the Patriarchs and Kings David and Solomon.  The Centre de Havilla (Havilla means Great Lakes), founded in Brussels by Professor Jochanan (Jean) Bwejeri, is actively defending this theory, and campaigns against the removal of the stars on the flag.  Grands-Lacs Confidentiel also reports that Israel, the United States and Britain put pressure on the government of Burundi to maintain the stars on the flag.

Note: This information is linked to the political struggle between the Tutsis and the Hutus in Burundi and Rwanda.  The reliability of the sources quoted has not been assessed.  Ed.