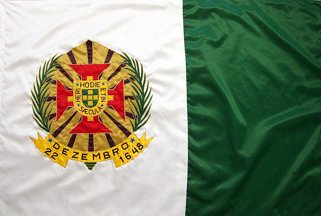 About the Flag of Alcântara

Alcântara city is located in Maranhão state in Brazil. Itīs written in Latin HERI, HODIE ET IN SAECULA which translation is: YESTERDAY, TODAY AND IN THE CENTURIES. The green color means the sugar cane production and the white means the cotton production. Both were the ancient wealth of this city during the slavery times, two centuries ago. The laurels represent glory and in the middle the red cross is the symbol of the Order of Christ, a Portuguese religious order which fought against the Arabs in Portugal in the XV century. They also sponsored the great Portuguese navigations all over the world in that time. In the center the little cross is formed with 5 yellow squares. Each one represents a wound that Jesus suffered before his death: 2 on the hands, 2 on the legs and the ultimate in his body. Finally, the city was founded in December 22th, 1648.
In this city is located a modern Brazilian space center ( www.cla.aer.mil.br ) which has become more and more important.
Eduardo Machado Corrêa, 18 December 2003