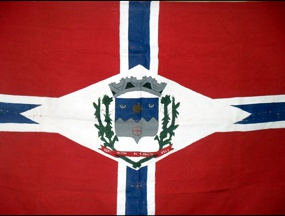 The flag of the small municipality of Monte das Gameleiras, State of Rio Grande do Norte, Brazil, 5,746 inhabitants, is red with a centred blue cross edged in white, with the municipal arms centred on a white lozenge.
Aristobulo Lima, 15 November 2014

The municipality of Serra de Săo Bento (5,746 inhabitants in 2010; 9,664 ha) is located 130 km south-west of Natal, on the border with Paraíba. The municipality was established by Law No. 2,337 of 31 December 1958, separating from Nova Cruz. The municipality (lit., St. Benedict's Mountain) is named for St. Benedict of Nursia (c. 480-542; canonized in 1220 by Pope Honorius III), whose Rule was the foundational document for thousands of
religious communities in the Middle Ages.

The municipal symbols are prescribed in Article 3 of the Municipal Constitution, adopted in March 1996, as "the flag, the coat of arms and the anthem".
http://www.camaradeserradesaobento.com.br/images/legislacao/5/lei-organica1400095088.pdf - Municipal constitution

The flag of Serra de Săo Bento is red with a blue cross fimbriated white. In the middle is placed a blue lozenge charged with the municipal coat of arms.
http://erinilsoncunha.blogspot.fr/2011/12/feliz-aniversario-para-nossa-serra-de.html - Erinilson Cunha's blog [source of the image, too]

The coat of arms in today's use is slightly different from the one represented on the flag, differing mostly by the depiction of the mural crown and of the plants that support the shield.
Ivan Sache, 27 December 2014