Editorial Remark: It must be noted that all the opinions are the authors opinions and not of FOTW. Our site is non-political and concentrates only on vexillological issues.

After the decomposition of USSR, Belarus adopted a white-red-white flag but the referendum on 14-May-1995 came back to the Soviet-like flag.

The first national state of the Belorussians was proclaimed on 09.03.1918 as Belorussian People's Republic, and its independence (from Russia) was proclaimed on 25.03.1918. It was liquidated on 05.01.1919. Its flag was white-red-white horizontal stripes. Here is some photo evidence.
Valentin Poposki, 21 March 2012

The white in the flag is an allusion to the name of the country - 'White Russia' (or 'White Ruthenia'). The red is for national freedom and the rising sun. White and red frequently appear in the national costumes of White Ruthenians.
Stuart Notholt

I found some news from Belarus:
from NEWSLINE Vol. 1, No. 165, Part II, 21 November 1997 (<www.rferl.org>):
"LUKASHENKA OPPONENTS STAGE FLAG PROTEST. On the first anniversary of the vote that gave President Alyaksandr Lukashenka sweeping powers, Belarusians opposed to his rule displayed the now outlawed red-and-white national flag, RFE/RL's Belarusian service reported on 20 November. Some flags were so large that the authorities had to use heavy-duty equipment to remove them. No single group has taken responsibility for the latest protest."
Christian Berghnel, 6 December 1997

Is the W-R-W actually outlawed in Belarus then? I mean rather than simply no longer being used.
Roy Stilling, 6 December 1997

from http://www.savva-la-belle.com/belarus/symbols.shtml (no longer available):
The origins of the traditional white - red - white Belarusian flag are lost in the mists of ancient history. It is possible that the banner was designed simply to distinguish Belyj Rus (White Russian) forces from those of the Princes of Kiev and Muscovy by placing the red favored by the Rus on a background of white.
But the traditional story is that when the united armies of Poland and the Grand Duchy of Litva and Rus defeated the Germans of the Teutonic Order at the great Battle of the Grunewald in 1410, a wounded Belarusian knight tore off his blood-streaked bandage and waved it aloft as a victory banner. That banner has been flown ever since, so the story goes, as a sign that Belarus will always prevail -- no matter how badly wounded it may be!
Jarig Bakker, 9 July 1999

The old Bielorussian colours have always been the white and red and in fact the flag of the first independent government of a "Byelorussian People's Republic" (in exile in Vilnius from 1919-1925) was a white flag with a red horizontal band of red, the central red stripe being bordered by a thin black stripe.
Emil Dreyer, 30 September 1999

The German weekly news magazine "Der Spiegel" sometimes contains photos with flags. At issue 7 of 2001 (p. 166) you can the former prime minister of Belarus, Chigir, with some tiny desktop flags, one of them white-red-white with some device in the centre. See www.smev.de.
M. Schmöger, 28 February 2001

In to today's New York Times, there is an article about the recent election in Belarus with a photo of dissidents flying the W-R-W flag.
Al Kirsch, 11 September 2001

The white-red-white flag was official during the National Republic, which lasted only nine months (March-December 1918), before the occupation of the country by the Soviets. Its official use was restored in 1991, but abolished by Alyaksandr Lukashenka in 1995. The great historian and patriot Vaclau Lastouski, president of the Democratic Republic (1919-1923), afterwards murdered by Stalin, proposed that the name of the country should be changed to "Kryvija", in order to distinguish Belarus as much as possible from Russia (the "Kryvitci" or Kryvians were a Slavic tribe in the Middle Ages). To tell the truth, the name "Belarus" is much older than "Rossija".
Name withheld by request, 18 April 2002

"The rise and fall of Belarusian nationalism" (Pittsburgh: Univ. of Pittsburgh Press, 2015), pp.88-89, gives some more information about its origins, with a bibliographical reference to a book in Polish. The author says it was designed in 1917 by Klaudiusz Duz-Duszewksi (1891-1959). Several explanations were given of its significance. The designer's son claimed his father "had seen the design on ribbons carried by Belarusian students in Saint Petersburg already before 1915". Belarusian Free Corps members in Estonia and Latvia claimed the colours stood for sweat, blood and tears. The prominent nationalist politician Vatslau Lastouski said "It reminds us of our [white] peasants' coats with a red belt."
Kenneth Fraser, 10 November 2015 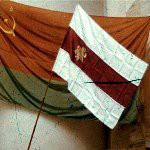 I do not recognize the version of the Belarus flag in the photo. It looks like the previous flag with a small image of gold knight on a horse, similar to images of Vytautas on Lithuanian flags. Here is the story below that was sent to me about a Belarus soccer fan being banned from using the red/white flag at a game in Poland.

http://collaboration.org.ua/en/polish-prosecutors-banned-belarusian-national-flag/
"Belarusian fans have no right to support national team under a national white-red-white flag on international sporting events in Poland. This follows from the request of the Polish prosecutors on the application of an offense against a group of Belarusian basketball fans at the match Belarus-Lithuania in Bydgoszcz. Request to the Polish prosecutor's office was sent by Belarusian fan Ihar Shchekarevich. According to Polish prosecutor, white-red-white flag "is not mandatory national flag of Belarus". Therefore, the Belarusian fans were not allowed to use it at the match. Refusal to leave the stadium Polish prosecutors described as a resistance " from Shchekarevich. Therefore, the security guards did not break the law when they used physical force against Shchekarevich. Belarusian himself is not surprised by this answer of prosecutors.
Shchekarevich: "Yes, such a response is not surprising. I got it from the Polish prosecutor's office. They are, in my opinion, deliberately transmit bank information of Ales Belyatsky to Belarusian authority. This is the same prosecutor's office, which has being persecuting a political refugee Andrew Zhukavets for 12 years. I think the Polish prosecutor's office has a lot of "Belarusian skeletons" in the locker. In the near future I will consult with the leadership of the Center "Collaboration without borders" and decide which steps we take in this matter further".
Let us remind that the incident occurred on June 25, 2011 during the match of women's European basketball championship in Bydgoszcz. Belarus played against Lithuania. Guards of the stadium, which hosted the game, prevented a group of Belarusian fans to deploy white-red-white flags, and then rudely removed Belarusians from the stadium."
from: http://collaboration.org.ua/en/polish-prosecutors-are-forced-to-punish-guilty-of-insulting-the-belarusian-flag-photo

Variant with the "Pahonia" arms

In a post on the FOTW-Facebook Group, Pietro Lorenzo Pavan shows a flag used in a protest in Belarus in response to the 2020 Presidential Elections in which opposition parties disputed the results of Alexander Lukashenko winning the election. This protestor uses the 1991-1995 national flag charged with the "Pahonia" arms placed in the center of the flag. Both the flag and the emblem are well used symbols of the opposition and ex-pats/diaspora.
Zachary Harden, 11 August 2020