In the last decades of the 19th century the official flag of Canada, on land, was the Union Jack. This was not, strictly speaking, the national flag of Britain (or of Canada), but a flag of Queen Victoria, the monarch of Canada.

At sea unarmed ships of the governments of the British Empire flew a Blue Ensign, that had the union jack in the upper corner next to the staff, and in the middle of the fly, a badge that indicated the government, or the government department, that operated the vessel.

Merchant ships flew the Red Ensign, a red flag with the union jack in the corner, but no badge in the fly.

The badge on the flag used by Canadian government vessels was a shield, derived from the Great Seal of Canada, which combined the arms of the four original provinces, Ontario, Quebec, New Brunswick and Nova Scotia.

Canadians contrived a distinctive land flag by adding the badge from the Canadian Blue Ensign to the fly of a Red Ensign. A Red Ensign should, by convention, not have been used on land, but there was no specific prohibition and it acquired more or less official status.

In 1870 when Manitoba became the fifth Canadian province it was, unlike the other provinces, not represented on the flag. This resulted in the production unofficial flags, which had an enlarged badge that include the Arms of Manitoba. Decoration was added in the form of a maple-leaf garland and a crown, copied from the personal flag of the Governor-General, and a beaver that probably represented the Hudson's Bay Company, which had administered the general area of Manitoba before it became a Canadian province.

All the provinces had Arms, but the Dominion of Canada itself still had only a Seal and no Arms. This was corrected when full armorial bearings were granted to Canada by King George V on 21 November 1921. In the following year the shield from the Arms became the badge on the Canadian Blue and Red Ensigns, and the need for the nine-province-badge unofficial Red Ensign disappeared.
David Prothero, 6 February 2000

An interesting flag. I notice that the Union Jack canton is smaller than 1/4, and the overall ratio is much smaller than 1:2. The placement and size of the badge are also very irregular. What can be said about this?
António Martins, 05 February 2000

Well, it was not an official flag, so anything goes. Also, although this flag was introduced in about 1907, it was following the pattern set by the "five province badge" flag of 1870.

1:2 is not a very convenient proportion. Unless there are other considerations, a flag is likely to be made in the "more natural" proportions of 2:3 or 3:5 ?

This is not as extreme as in the early ensigns of some colonies when it was not uncommon to have the badge in the extreme lower fly corner. It may have been thought that this improved the appearance of the flag, by balancing the UJ in the top left corner; and/or that a badge should not be in the centre of the fly, where it straddles two quarters.

Before the middle of the 1700's the canton in, I think, almost any flag was nearly square and usually less than a quarter. It was, in my opinion, the introduction of the overall St George's cross on the White Ensign that resulted in the enlargement of the canton, to fill the space created by the cross. For uniformity and manufacturing considerations, the cantons on the Red and Blue Ensigns were also enlarged, but cantons of, for example, army flags, continued to be nearly square and much less than a quarter. For a parade flag the navy followed army tradition; the Queen's Colour of the Royal Navy, although basically a White Ensign it is 5:6.
David Prothero, 11 February 2000 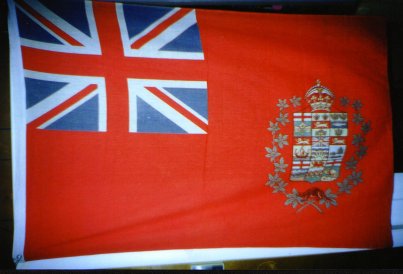