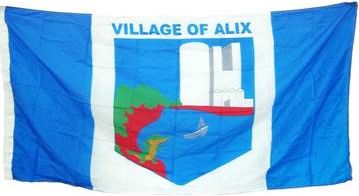 The Village of Alix (population: 825) is located in the County of Lacombe in Central Alberta.

The arrival of the Canadian Pacific Railway in 1905 promoted the growth of a tiny hamlet on the homestead of Joseph Todd, one of the first settlers of the area, and for some time this settlement was called Toddsville. After the C.P.R. built the first line through the area, Sir William Van Horne, then President of the C.P.R., changed the name to Alix after Mrs. Alexia Westhead, the first woman settler in the district.
Source: AlbertaFirst.com Community Profiles

The municipal flag of the Village of Alix has a representation of Alix the Alligator, a mythical creature which is said to be living at Alix Lake.

Also on the flag are representations of a recreational boat on Alix Lake and the Rahr Malting Company facility which is the largest facility of its kind in Western Canada which takes advantage of the prime barley production occurring in the surrounding agricultural region and existing railway lines.
Darrell Neuman, 1 January 2007