image contributed by Darrell Neuman, 12 May 2016

Bruderheim, Alberta (population: 1,200) is located northeast of the City of Edmonton.
Darrell Neuman, 4 May 2006

The municipality of Bruderheim, Alberta has a new flag design which commemorates the recovery of a meteorite after a large fireball was seen on March 4, 1960.
Darrell Neuman, 13 May 2016 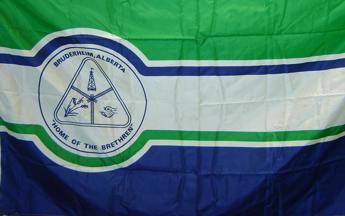 image contributed by Darrell Neuman, 7 May 2006

The previous flag featured an oil derrick, three converging railroad tracks, wheat and a handshake along with the words: 'Bruderheim, Alberta Home of the Brethren'"
Darrell Neuman, 4 May 2006

The slogan "Home of the Brethren" is not just a pun on the city's name: it was founded by members of the Moravian Church, commonly called the Moravian Brethren, quoting connect.ab.ca:

The Bruderheim community was started as a Moravian settlement by German speaking emigrants from Volhynia, Russia, in 1894. The Moravian congregation was officially organized under lay-leadership by Andreas Lilge on May 6th, 1895. In February 1896, the first pastor, the Rev. Clement Hoyler, arrived. By the end of the year the congregation had already built a solid log church.