Calgary is the largest city in Alberta, situated at the confluence of the Bow River and the Elbow River in the south of the province, in an area of foothills and prairie, about 80 km east of the front ranges of the Canadian Rockies.

The flag of the City of Calgary has a red field with horizontal white stripes at the upper and lower edges, both 3/32 of the height of the flag. Centred on the left half of the field is a large white stylized letter “C” 11/16 the height of the flag, with a stylized white Stetson cowboy hat in its open side. The “C” has a narrow red line running its entire circumference, set toward its outer rim. The cowboy hat is a line drawing in white with a red background.
Alison Wilkes, Canadian City Flags, Raven 18, 2011

The colours of the flag recall Calgary’s lively history. The red field recalls the scarlet of the North-West Mounted Police uniform. Red and white also represent Calgary’s hospitality and spirit. The large “C” symbolizes many aspects of the city. It refers to the city’s centennial celebration; the character, change, culture, and charm of the city’s community; and the harmony among the city and hospitality and spirit of its citizens. The “C” also refers to Calgary, with the white Stetson cowboy hat for Calgary’s world-famous rodeo, the Calgary Stampede. The hat placed inside the “C” symbolizes citizens living inside their city. That famous “White Hat”, which has come to represent the city, was first manufactured and sold in Calgary in 1946 by Morris Shumiatcher, who in 1919 had established Calgary Hat Works, using the “Smithbilt” brand. In 1948, as part of a group of excited Calgary Stampeder football fans traveling to Canada’s Grey Cup championship in Toronto, Alderman Don Mackay and other fans wore Smithbilt white Stetsons. They presented the white hats to the mayor of Toronto and others to promote Calgary. When Mackay was elected mayor of Calgary in 1950, he began the tradition of presenting white cowboy hats to dignitaries and visitors as a symbol of Calgary. As the official maker of the white hats, Smithbilt supplies thousands each year, in three different styles, for presentation by the city of Calgary as its “brand”. A formal pledge to “spread the word” about Calgary has even been prepared for those receiving the coveted hat.
Alison Wilkes, Canadian City Flags, Raven 18, 2011

Chosen as a result of a contest conducted by the Centennial of Incorporation Committee and adopted by bylaw (ordinance) of the Calgary city council.
Alison Wilkes, Canadian City Flags, Raven 18, 2011

Gwin Clark and Yvonne Fritz (in 2011 a member of the Legislative Assembly for the Calgary-Cross district in Alberta).
Alison Wilkes, Canadian City Flags, Raven 18, 2011

Calgary previously used a white flag in proportions of 1:2, with a white field and a vertical band of red at the hoist, one-third the length of the flag. The red band bears a large “C” one-half the height of the flag, enclosing a “counterchanged” image of the city’s coat of arms (in red on black on the left and in black on red on the right). Centred in the white field is CALGARY in large black sans-serif letters, with a red maple leaf above and another below. The leaf matches that on the national flag.
Alison Wilkes, Canadian City Flags, Raven 18, 2011

The flag is 3'x6' with a rope and toggle hoist. 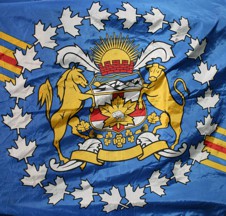 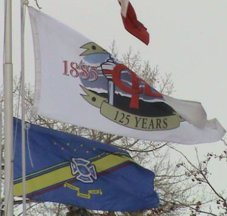 This image is the flag commemorating the 125th anniversary of the Calgary Fire Department and features the Calgary Tower and snow capped Canadian Rocky Mountains in the background.
Darrell Neuman, 15 December 2010