The Town of Castor is located in the County of Paintearth #18, in east- central Alberta. It is 160 km east of Red Deer, 245 km southeast of Edmonton, and 290 km northeast of Calgary.

The beaver in is Castor canadensis
Phil Nelson, 29 December 2005

The name is probably French in origin - it would fit in with lots of other Metis French names in central Alberta - Lac La Biche, Grande Prairie, Grande Cache, Beaumont. It is certainly a canting arms on the flag.
Rob Raeside, 29 December 2005

The source given for the "heraldic banner of arms" is the grant of arms, flag, gonfanon and badge, registered on 15 August 2011 on the Public Register of Arms, Flags and Badges of Canada, vol. VI, p. 62 (not online yet on the website of the Governor General of Canada).

Crest
Issuant from a mural coronet azure masoned and set with barley heads a beaver sejeant or.

Supporters
Two coyotes or each charged on the shoulder with a flame azure and standing on a beaver dam proper.

Flag
A banner of the arms.

Gonfanon of the arms, its points azure, or and azure. 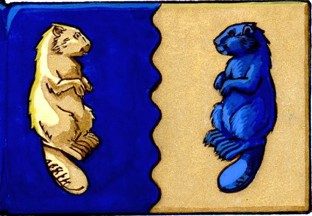 The town of Castor also displays an armorial flag depicting a vertical bicolour, blue and white(?) divided by a wavy line, and in each field a counterchanged beaver.