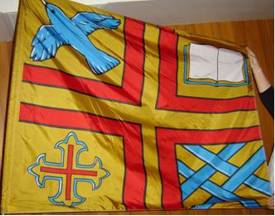 This flag pictured is displayed in front of the municipal town office and fire and ambulance emergency facility building. More info on this flag and town coat of arms can be obtained on the town website.
Darrell Neuman, 4 July 2006

Description: A banner of the Arms; Coat of arms: Or a cross Gules voided throughout of the field between in the first quarter a Mountain Bluebird (Sialia currucoides) volant bendwise Azure, in the second an open book Argent bound Azure, in the third a cross flory Azure voided of the field and charged with a cross couped Gules, and in the fourth two bendlets and two bendlets sinister interlaced Azure; Symbolism: The gold background symbolizes the community's wealth, the nearby grain fields, and agricultural research. The red cross represents Lacombe's situation as a crossroads of Highway 2 and Highway 12, while the inner cross recalls the missionary work of Father Albert Lacombe (1827-1916), the town's namesake. The bird is one of Lacombe's most important chosen emblems. The cross with fleur-de-lis ends repeats the symbolism of the main cross, with the fleurs-de-lis a reference to Father Lacombe and to a symbol found in the arms of the Rt. Hon. Roland Michener, a native son of Lacombe whose birthplace is an important heritage site. The book represents the Canadian University College and the agricultural research centres in Lacombe, as well as the Town's commitment to education, research and technology. The diagonal crosses are the central element of the personal coat of arms of Roland Michener, a reference to the fact that he was Canada's 20th Governor General. Image: at Governor-General's website
Pascal Vagnat, 1 August 2005 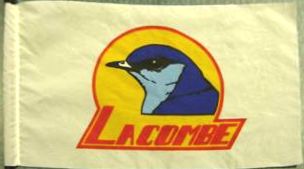