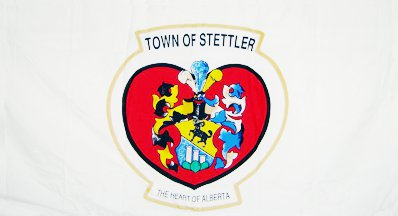 The Town of Stettler Alberta (population: 5418) is located about 101 kilometers east of the City of Red Deer in Central Alberta. The town’s coat of arms consists of a large heart along with the words: “The Heart of Alberta”. The community is named after Carl Stettler who immigrated to the area and was one community’s first politicians. On the coat of arms is a depiction of a black ram which is similar in design to the one illustrated on the flag of the Swiss canton of Schaffhausen. 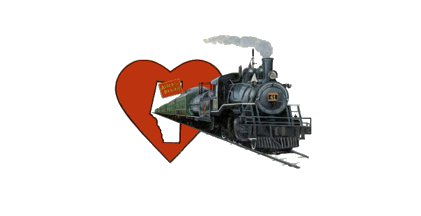 The company’s flag is displayed outside the railroad terminal buildings in Stettler and Big Valley and features the No. 41 Steam locomotive pulling passenger cars along a railroad line. Also on the flag is a heart. The train is emerging from a gap in the heart which is in the shape of the provincial boundaries of Alberta. The company name, Alberta Prairie, is displayed on a small red square with yellow colored font.