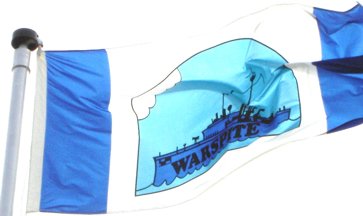 Warspite, Alberta (population: 75) is located about 110 km East of Edmonton in Smoky Lake County. This flag was officially displayed on July 21, 2006. The following are 2 excerpts from the Smoky Lake Signal newspaper and the link to the website:

On Friday, July 21, 2006 the Warspite Community Hall Association, in conjunction with the County of Smoky Lake, raised the newly designed flag of Warspite. The honor of hoisting the flag was given to the last mayor before amalgamation, Ernie Purschke. The delegation included ex-mayor Diane Parsons as well as County Reeve Cory Ollikka and Division 2 Councillor Barton Coady. After introductions a movement of silence was had for the fallen RCMP officers, followed by brief remarks on the origin of the name Warspite.

Ex-Mayor Diane Parsons also told of a time that she was at a conference and meet someone who had served on the H.M.S Warspite during World War II.

The name Warspite or Warspight was used as a ships name during wars in Spain. Her official crest shows a ships gun in gold on a green field and her motto "I despise the hardships of war".

The Warspite was a battle ship, which was launched in Devonport, England in 1913. This is where this community got its name.

The Warspite fought at the battle of Jutland, First World War (1914-1918) and Second World War, mainly in the Mediterranean. There were no fewer than fourteen separate battle honors to her name.

In 1947 she was sold, while being towed from Portsmouth to Clyde for breaking up, she was driven ashore in Mounts Bay. 1n 1956 the work of dismantling and removing the remains of the Warspite was complete.

This "Great Old Lady" her light grey paint shining, her spotless teak ladders and decks and gun muzzles and brass work flash in the sunlight.

In 1967 the name was revived for a Royal Navy nuclear submarine, which was built and commissioned in that year.

The name Warspite has a real legacy.

There didn't seem to be anyone around town for me to talk to about this flag. Since there is no administrative building, I had to rely upon the digital pictures that I took of the flag that was flying outside in a municipal park.
Darrell Neuman, 10 November 2006