The Greater Vancouver Regional District unilaterally re-named itself "Metro Vancouver" 1st September 07; they didn't get a new Letters Patent, they just decided to use the new name. As of January 2008, the old GVRD flag is still used, although the letterhead they use simply erases the GV "check" logo.
Dean McGee, 11 March 2008

Since its name change from "Greater Vancouver Regional District", MetroVancouver sites were slow to get new flags, but I spotted one today. The green looks brighter (yellower?) than the old flag, the "G-check" is gone from the logo and the text is gone from the logo. Underneath the logo is the word mark "metrovancouver" all in lowercase, with "metro" in bold, and no space between the words.
Dean McGee, 7 May 2011 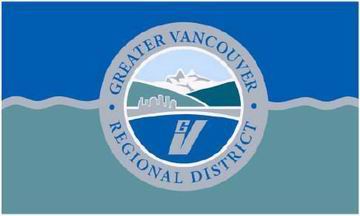 At its April 2, 2004 meeting the Corporate and Intergovernmental Committee considered proposals for a Regional Flag. Discussion ensued regarding the three options for a regional flag that were designed by GVRD staff.

After discussion, the following recommendation was carried: That the Corporate and Intergovernmental Committee recommend Design 2 with the incorporation of the buildings in Design 3 for the GVRD flag, as outlined in the report dated March 25, 2004 titled "Regional Flag".

The "G Check" corporate logo has been in place and use since the early 70's.

The GVRD (locally, it is usually known by its initials -- so is BC) was founded in 1967 and currently includes 21 full member municipalities plus one "electoral area" i.e., all the places that are not within a municipality. The 22ndt municipality, Abbotsford, is actually part of the Fraser Valley Regional District, but participates with the GVRD's Regional Parks board. The boundaries have extended eastward to include the Langleys, Pitt Meadows and Maple Ridge. In 2004, the GVRD felt it needed a flag to represent it, and 3 designs were considered. The final design incorporates elements of designs #2 and #3. The flag, adopted 5 April 2004, has since been adapted for use as a letterhead logo. Above a cityscape are The Lions, a two-peaked mountain visible in the mountains north of Vancouver.
Dean McGee, 4 August 2005