Port Alice is located in the north of Vancouver Island. The flag includes two elements from the village's coat of arms, namely the arms in the canton and the crest in the fly.

From the city's coat of arms page:

The Shield: Looking first at the shield, the wedge-shaped pieces are known as piles. Inasmuch as they interlock together they suggest the capital letter "W" and were intended to refer to the west, Western Forest Products and Western Pulp and Alice Whalen after whom the Village is named. Two of them are green suggesting the abundant timber in the mountains nearby.

Each of them are decorated with the head of a cougar representing the wildlife of the region. The other pile is striped in blue and white wavy bars, the standard method in heraldry of representing water and in this case, a reference to the inlet. The field colour showing between the piles is gold, the symbol of wealth and prosperity. The shield is encircled with a blue border set with raindrops, the climactic feature that generate the forest upon which the economy of the Village depends.

The Crest: The crest makes use of the Bald-headed Eagle in the act of "stooping" but in this case holding in its claws a double-bladed axe, another reference to the forests. The eagle in this attitude is a symbol already in use by the Village and it appears again in the Flag of the Village.

From the city's main page:

The Village's population is 1126 (2001 census). The village began "about 1917", and "The town moved to its current location in 1965, becoming British Columbia's first 'instant municipality.'"

It is part of the Regional District of Mount Waddington, along with Port Hardy, Port McNeill, and Alert Bay.

After reading and re-reading, I think they mean the Eagle is "swooping", not "stooping".
Dean McGee, 14 September 2006 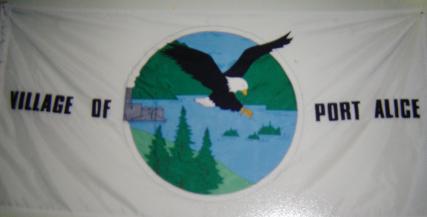 The Eagle symbol was already in use on the old flag, with a round, seal-type badge, and "VILLAGE OF" ... "PORT ALICE" written on the flag, the old symbol shows the eagle, and a landscape with mountains, trees, a fjord, and a sawmill.

The eagle logo is visible in the masthead of the Village's newsletter. (PDF file)
Dean McGee, 14 September 2006