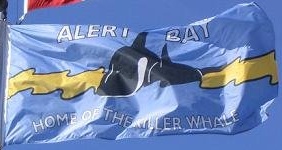 Alert Bay, like a small jewel, lies cradled in the arms of Cormorant Island. This crescent shaped island is situated just off the northeast coast of Vancouver Island, and is approximately 180 miles by water from the city of Vancouver. Both Alert Bay and Cormorant Island were named after the British warships H.M.S. Alert and H.M.S. Cormorant, while they were engaged in surveying the coastal waters of British Columbia, between the years of 1846 and 1861.

Alert Bay has a population of about 1,300 and is comprised of the Village of Alert Bay, the 'Namgis First Nation and Whe-la-la-u and area Council. Cormorant Island is about 3 miles long and half a mile wide. The average rainfall is 60 inches per year and the temperature averages 75 degrees Fahrenheit in summer and 35 in winter.

From humble beginnings, Alert Bay has since become an important center of commerce and services, while still retaining its' quaint fishing village atmosphere and unique lifestyle. This rare combination of embracing the past while planning for the future has enabled Alert Bay to make major contributions to the development of the British Columbia coast. Visitors from around the world come to enjoy the colourful native culture, the friendly community, the quiet magnificent scenery and superb fishing. Within easy reach of Alert Bay are hundreds of lakes and miles of tranquil inlets awaiting the vacationer whether arriving by airplane or by boat.

The present countenance of the Alert Bay Community reflects much of its past history. Visitors to the area will be fascinated by the mixing and contrasting of the cultures. The native art forms are represented by their carvings, paintings and metal crafting. Artifacts and events of the past can be viewed in the community's Library/Museum and the U'mista Cultural Centre. Above all, a casual stroll from one end of the community to the other instills one with an appreciation for the efforts of the early pioneers, who carved themselves a place to live, work, and also crafted the roots of the village which now exists on the temperate south shore of Cormorant Island.
City of Alert Bay

The flag of Alert Bay is light blue with a yellow wavy stripe, fimbriated black, horizontally across the centre, over which is an image of two breaching killer whales. Above in white, edged black, the name ALERT BAY, and below, similarly, HOME OF THE KILLER WHALE.