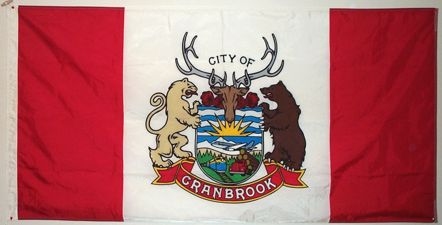 Cranbrook was incorporated as a municipality in 1905, but was established previously to this in 1898 as a consequence of the construction of the Canadian Pacific Railway line through the Crow's Nest Pass to Nelson, British Columbia. Cranbrook quickly replaced a Northwest Mounted Police outpost located six or seven miles to the east at Galbraith's Ferry (later named Fort Steele) located on the Kootenay River. As land for the railway was acquired, Speculators at Fort Steele drove up the cost of land there such that it was bypassed by the railway and quickly declined. The City was named for the ancestral home of its founder, Colonel James Baker (British Navy, ret) in Kent, England.

Cranbrook is the area center for the East Kootenay region which stretches from the Alberta/Britsh Columbia border on the east to about 60 miles west of the City. The region is named for the Kootenay Indians (of the Ktunaxa/Kimbasket Nation) which apparently used the area for thousands of years as its ancestral land. It was previously called "Joseph's Prairie".

The flag of the City of Cranbrok is very similar to the Canadian national flag--1/2 width to length with red bars at each side of the flag and the city's official arms in a white square in the middle of the flag.

I have not been able to determine the date of official adoption of the coat of arms or of the city flag.

The coat of arms is as illustrated as in the above image of the flag. I have not been able to find a specific description of the arms, which appear to be supported by a mountain lion and a bear, the upper portion of the crest including the waves and crown which often represent the Province of British Columbia; below that the mountains and forests of the area with a train and a logging truck below. The coat of arms is surmounted by the head of an Elk.
Brian James Erickson, 7 April 2004