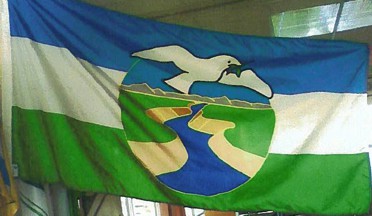 In 2002, the Regional District received a suggestion from a member of the public that the Regional District create a flag to depict the Peace River region. Directors and staff came up with a design. The flag was adopted by the Regional Board in May 2002. The flag depicts the mighty Peace River (which flows through the region), the dove of peace, agriculture, forestry and the Rocky Mountains. Information and photo of the flag thanks to Suzanne Garrett, Corporate Services Coordinator.