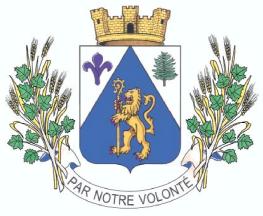 This municipality was granted a flag, arms and a badge by the Canadian Heraldic Authority on January 6, 2003, according to the Canada Gazette.
Luc Baronian, 11 June 2005

Description: Azure a lion rampant holding a crosier Or

Symbolism: The city's flag is blue and displays in centre the gold lion of the arms holding a gold crosier. The city itself is represented by a gold lion holding an Episcopal crosier in the centre of a blue shield. This imagery refers to St. Jerome, the patron saint of the city, who was born in Dalmatia (presently Croatia) in 341 and died in Bethlehem in 420. The saint is reputed to have tames a lion that became his faithful travel companion. He was conferred the title of Doctor of the Church fir having produced the Vulgate, the first integral translation of the Holy Scriptures into Latin. He is often represented holding a crozier of a cardinal and in the company of a lion. The lion also symbolizes the strength, courage and spirit of innovation that characterizes the Ville de Saint-Jérôme as demonstrated by its status of regional capital. The Episcopal crosier further represents the diocese whose bishopric and cathedral are situated in Saint-Jérôme. It also emphasizes the role of the church in the development of the city and especially that of curé Labelle who was dubbed King of the North. The arms of Saint-Jérôme further reflect the various territories to which the population belongs. Quebec is here represented in the upper left corner by the wild iris, the official provincial floral emblem since 5 November 1999. The Laurentian region is exemplified by a white pine in the upper right corner taken from the regional arms, which recognizes that this tree was once the most abundant and is still present in the area. The dominant blue colour of the shield alludes to the water of the Rivičre du Nord that crosses the region and has provided its original resources. The gold colour of the lion refers to the light of summer, the purple of the iris represents autumn, the green of the pine symbolizes spring and the white sections in the upper shield allude to winter.