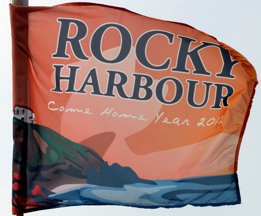 Rocky Harbour is one of the centres of the Gros Morne National Park in western Newfoundland. Although it does not fly a flag of the town, this flag is widely used at several tourist-oriented venues – it depicts a homecoming event last year. The flag displays a scene of the harbour with an orange sky and the name ROCKY HARBOUR and slogan Come Home Year 2012 on the orange.
Rob Raeside, 11 July 2013