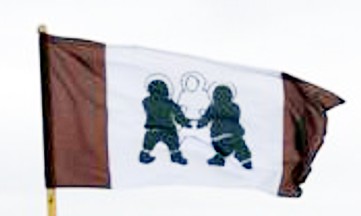 The flag of Kugluktuk can be seen on a photo here.

About Kugluktuk from Wikipedia: Kugluktuk, Nunavut

Kugluktuk (Inuinnaqtun: Qurluktuk, "the place of moving water"; Inuktitut: ᖁᕐᓗᖅᑐᖅ, formerly Coppermine until 1 January 1996) is a hamlet located at the mouth of the Coppermine River in the Kitikmeot Region of Nunavut, Canada, on Coronation Gulf, southwest of Victoria Island. It is the westernmost community in Nunavut, almost on the border with the Northwest Territories.

The traditional language of the area was Inuinnaqtun and is written using the Latin alphabet rather than the syllabics of the Inuktitut writing system. Like Cambridge Bay, Bathurst Inlet and Umingmaktok syllabics are rarely seen and used mainly by the Government of Nunavut.