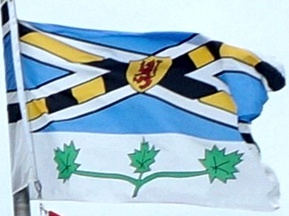 The flag is flown near Confederation Bridge.

The former version of the flag is without the white stripe and green leaves in base.
Ivan Sache, 27 May 2019


Here is the description of the flag of the Community of Borden-Carleton, Prince Edward Island:

The blue and white satire with the smaller shield bearing the lion is representative of Scotland, from whence the early settlers came. The cable twist of gold and black symbolizes the first submarine cable in America, laid from Cape Tormentine, New Brunswick to Carleton Point in 1851. The opposite diagonal band represents the arrival of the railway to Borden in 1916.

The blue on the flag is brighter then on the shield, as can be seen on a photo here.

The Community of Borden-Carleton was created as a result of the April 12, 1995 amalgamation of the Town of Borden and the Community of Carleton Siding. The community covers a land area of 12.94 square km and had a population of 798 according to the 2006 Census of Canada.

Borden-Carleton, located in the southeast of Prince County and bordering the Northumberland Strait at its narrowest point, is the principal "Gateway" to and from New Brunswick as it is at the foot of the Confederation Bridge. As a result, Borden-Carleton is the first community that visitors to Prince Edward Island encounter and has developed as a tourist gateway.

The core of Borden-Carleton is characterized by residential neighborhoods, neighborhood and tourist-oriented commercial development, institutional and light industrial uses. The Community's waterfront is a mixture of former industrial lands, left over from the building of the Confederation Bridge and now ripe for redevelopment, coastal vistas, residential developments and resource-based uses. Running through the community is the Trans-Canada Highway with ribbon development consisting of residential, highway commercial, and tourism commercial uses. - from: borden-carlton.ca