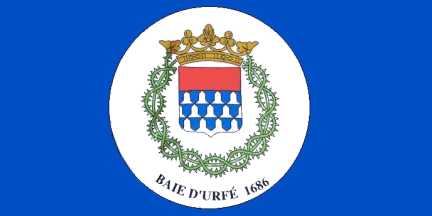 Baie-D'Urfť is named for FranÁois Saturnin Lascaris d'Urfť, who was appointed in 1685 priest of the Saint-Louis parish, which had been established in 1676 by the Order of Saint-Sulpice, then lord of the Montreal Island. Isolated on the shore and surrounded by a dense forest, the parish was threatened by the Iroquois; in autumn 1687, eight colonists were killed in an ambush, including the sacristan Jean de la Londe, first colonist of the area. Father d'Urfť was repatriated to France; the parish church was transferred in 1703 to a safer site, close to the Senneville fort.
Centuries later, the area was served by the Bayview railway station. In 1902, some inhabitants asked the railway to be renamed as Bois-d'Urfť, which gave the name of the town that was incorporated in 1911.
http://baie-durfe.qc.ca/fr/ - Municipal website
Ivan Sache, 26 March 2017

I took a photo of this flag in 1999 in a Montreal Urban Community building. The background color was a paler shade of blue however.
Luc Baronian, 9 May 2005

The flag of Baie-D'Urfť is blue with, in the middle, a white disk charged with the municipal arms and the writing "BAIE D'URF… 1686".

The arms of Baie-D'Urfť were designed in 1961 by Mayor Tommy Lee, based on the arms of FranÁois d'Urfť. The Urfť shield, "Vair a chief gules", is engraved on the base of FranÁois d'Urfť's chalice, preserved in the Notre-Dame Museum. The shield is crowned by a Marquis' coronet, recalling that FranÁois d'Urfť was Marquis of Beauzť. The crown of thorns surrounding the shield recalls that d'Urfť belonged to the Society of Saint-Sulpice.
- http://www.baie-durfe.qc.ca/FRANCAIS/armoiries.html - Municipal website

The Urfť arms are seen in several rooms of the family castle, the B‚tie d'Urfť, located in Saint-…tienne-le-Molard (Forez, France). Claude d'Urfť (1501-1558), Governor and Bailiff of Forez, represented the King of France at the Council of Trent (1546) and was appointed Ambassador of France at the Holy See; he revamped the castle in Renaissance style, building a grotto that is the last from that period kept in France. His grandson Honorť d'Urfť (1567-1625) is the author of the first novel sequence in the French literature, "L'Astrťe" (5,400 pages, written between 1607 and 1625).
- http://www.loire.fr/jcms/lw_896393/saint-etienne-le-molard-la-batie-durfe
Ivan Sache, 23 July 2012

Symbolism
The arms were borne by FranÁois-Saturnin Lascaris díUrfť (1641-1701), a Sulpician missionary and the first resident priest of Saint-Louis-du-Haut-de-líőle, the site of the present-day town of Baie-díUrfť. The last member of the Lascaris díUrfť family died in 1794, and the town has used the arms since 1960 to honour its association with the family. The unusual arrangement of the vair pattern at the base of the arms replicates their rendering on a silver cup once owned by FranÁois-Saturnin Lascaris díUrfť, now in the collection of the Notre-Dame Basilica of Montreal. According to tradition, the arms were granted to Wlphe le Robuste, the progenitor of the family of Lascaris díUrfť, to honour his participation in the Siege of Antioch in 1098. In battle, Wlphe wore a coat of scarlet lined with squirrel fur, the heraldic ďvairĒ, and this coat inspired the design.