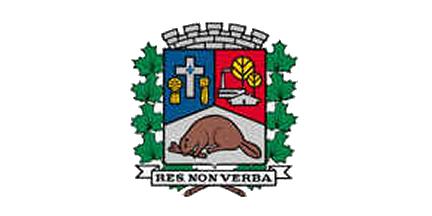 I have personally only seen the logo flag flying in the late 1990s, but I have seen the white flag with coat of arms in a Montreal Urban Community building in 1999. Beaudoin reports two flags: a 1:2 blue-white-blue triband with the arms on the white stripe, and a flag with a former logo. The more recent logo was adopted on August 23 1988, and was conceived by Robert Jalbert. In the logo, one can distinguish the letters VSL for Ville de Saint-Lťonard. Its configuration evokes movement, dynamism and strength, and imposes itself by its symmetry, while its four elements form an unbreakable whole, suggesting multiculturalism, municipality services and green spaces confined between the four cardinal points. The arms were adopted in 1963 by the municipal council, while the logo was adopted in 1988. The symbolism of the arms is as follows: the French shield reflects the roots; the sinister part reflects the past, the cross and the fleur-de-lys referring to a Catholic French-Canadian community, while the wheat and celery represent agriculture; the tree, house and factory on the dexter part reflect the city's determination for balance and harmony between ecology and socio-economic environment; the beaver on the bottom part suggests the past's activities and support for the future; the mural crown is a symbol of civic authority; the motto reads "RES NON VERBA" meaning 'action, not words'; the maple leaves symbolize belonging to Canada.