In 1882, the Toronto-based Temperance Colonization Society was granted 21 sections of land straddling the South Saskatchewan River, between what is now Warman and Dundurn. The aim of the group was to escape the liquor trade in that city and set up a "dry" community in the Prairie region. The following year settlers, led by John Neilson Lake, arrived on the site of what is now Saskatoon and established the first permanent settlement. The settlers travelled by railway from Ontario to Moose Jaw and then completed the final leg via horse-drawn cart as the railway had yet to be completed to Saskatoon.

In 1885 the Northwest Rebellion affected the tiny community in a variety of ways. Chief Whitecap and Charles Trottier passed through the present day University campus on their way to join Louis Riel's armed forces at Batoche, Saskatchewan. Following the fighting at the Battle of Fish Creek, and the Battle of Batoche, wounded Canadian soldiers convalesced at the Marr Residence which is today a historic site. A few died in care and were buried in the Pioneer Cemetery near the Exhibition Grounds.

A town charter for the west side of the river was obtained in 1903 (Nutana became a village in that year). On May 26th 1906 Saskatoon became a city with a population of 4,500, which included the communities of Saskatoon, Riversdale and Nutana. In 1955 Montgomery Place and in 1956 the neighboring town of Sutherland were annexed by the fast-growing City of Saskatoon.
Neal Wilson, 9 July 2016

The flag of the City of Saskatoon is divided vertically into green at the hoist (one-third the flag’s length) and thirteen alternating yellow and white horizontal stripes at the fly (two-thirds the flag’s length). In the centre of the green section is a sprig of saskatoon berries, purple with light green leaves and stem. Centred at the divide is a white disc, half the height of the flag, containing the city’s coat of arms. The simple shield has a horizontal top and simply-curved sides forming a pointed “U” shape. It contains two sections, the upper in green, the lower in the shape of a diamond in yellow (some versions show it in white). The upper section has, on the left, an open book in white with black details, and on the right, a wheat stalk in yellow surmounting a cogged wheel of six spokes in white, both with black details. The lower section has at its centre a black circle from which eight pairs of lines extend to the edges of the diamond. Above the shield is a lion in yellow with black details, oriented to the left and looking outward, holding a sprig of saskatoons, above a torse of yellow and green. Stalks of wheat in yellow, with three stems and four heads, wrap around either side of the shield. Below is a yellow ribbon in three sections, inscribed COMMERCE INDUSTRY EDUCATION in black serif letters; the central word is sometimes larger.
Alison Wilkes, Canadian City Flags, Raven 18, 2011

Green and gold are the city’s official colours and represent the importance of agriculture; green for growing crops and gold for the harvest. The seven yellow stripes stand for the city’s seven districts: North Park, City Park, Pleasant Hill, Mayfair, Caswell Hill, City Centre, and Nutana. The name “Saskatoon” comes from the Saskatoon berry (Amelanchier alnifolia), ever-present in the prairies and shown on the hoist of the flag and in the lion’s paw. The open book of learning comes from the shield of the University of Saskatchewan, and marks the connection between the academic seat and the city. The cogged wheel and wheat stalk represent the agricultural industry. The parallel lines extending from the central circle show the importance of Saskatoon, “The Hub City”, as a railway and distribution centre. The central circle is a coin (or “bezant” in heraldry) which signifies the commercial importance of the city. The lion in the crest comes from Saskatchewan’s arms.
Alison Wilkes, Canadian City Flags, Raven 18, 2011

In preparation for the city’s 70th anniversary celebrations in 1952, the Retail Merchants Association requested that something distinctive in the way of a city flag should be designed for decorative purposes. The city council agreed to the request as long as it would be able to review the final design. The colours gold, green, and white were chosen as the flag colours, and the council granted approval to use the city’s coat of arms and recommended the flag follow a design similar to the U.S. flag. On 7 July 1952, four designs were presented to council, which chose one as the city flag and pennant. A drawing of the winning flag was included on the front cover of the committee’s 70th anniversary book. The coat of arms was adopted 14 January 1949 (updating a previous design adopted 20 January 1913).
Alison Wilkes, Canadian City Flags, Raven 18, 2011

Descombe “Deck” Whitehead and Henry Mirtle, apparently. (Professor A.L.C. Atkinson, an engineering professor at the University of Saskatchewan, designed the coat of arms).

The selected flag was said to be the work of artist Descombe “Deck” Whitehead and sign painter Henry Mirtle; Whitehead designed it and Mirtle painted it to scale on a piece of wallboard. Apparently the painted flag was then discovered in a city transit garage by the city utilities manager, who liked it, and when offered the flag by Mirtle brought it back to City Hall, where it was displayed in the office of a city commissioner and eventually adopted as Saskatoon’s flag. On some versions of the flag, CITY of SASKATOON appears below the disc in sans-serif letters.
Alison Wilkes, Canadian City Flags, Raven 18, 2011

During the year 1948, the question of the City’s Coat of Arms was brought to the attention of the City Council. It was pointed out that the design which had been in use since being adopted by Council on January 30, 1913 was incapable of being described in proper heraldic language and therefore could not be formally adopted by bylaw. It was considered advisable that the City’s Coat of Arms be properly adopted and approved and Professor A.L.C. Atkinson was requested to design a new Coat of Arms and Crest. This was adopted by Bylaw No. 3081 and approved by Order-In-Council N110.49 dated January 14th , 1949.

The heraldic description of “Blazon” is:
Arms – Per chevron vert and or, in dexter chief an open book of learning argent leathered sable, in sinister chief a cogged wheel of six spokes in saltire and less of the third overall a wheat ear of the second, in a base a cross and saltire voided of the least with overall an annulet of the last encircling a bezant.

Crest - On a wreath of the colors a lion passant guardant or holding in his dexter paw a sprig of Saskatoon berries.

Motto – On a scroll are the words “Commerce Industry Education”

Note – The decoration flanking the shield is purely ornamental and is not mentioned in any blazoning. It is included (or omitted) both in particulars and in design according to the taste of the artist.

Symbolism –
1) The background of the shield is divided into two parts, the upper being green and the lower gold. This suggests the main agricultural background of Saskatoon; the green of growing crops, the gold of harvest.
2) The silver open book of learning bound in black leather, on a green field, is taken directly from the Arms of the University of Saskatchewan and marks the connection between the academic seat and the city.
3) The silver cogged wheel with golden wheat war superimposed is significant of industry predominantly connected with agriculture.
4) The eight sets of paralleled lines on the gold background, radiating from a hub are symbolic of the importance of Saskatoon as a railway and distribution center. The golden coin encircled by the hub is indicative of the commercial importance of the city.

Two clipped articles from the Saskatoon Star-Phoenix, likely from 1976, document the flag design. The first clipping in addition shows a green pennant, bearing the arms on a white disk toward the hoist and the spray of Saskatoon berries on the remainder of the pennant. The second clipping documents the discovery of the original flag, made by Dick Whitehead and approved by council in 1952, attached to a wall in a transit garage.
Neal Wilson, 9 July 2016 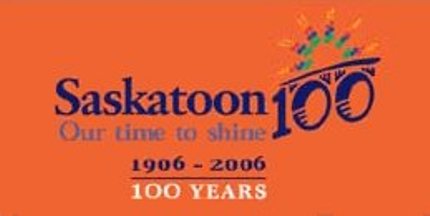 Formed in 1903, the Saskatoon Police Service is a Canadian law enforcement agency with both municipal and provincial jurisdiction, based in the city of Saskatoon, Saskatchewan. The SPS operations in cooperation with the Royal Canadian Mounted Police. In addition to law enforcement duties at home, members of the SPS have deployed worldwide to help train law enforcement officers in developing countries, such as Afghanistan and Kosovo.

The armorial bearings and flag of the Saskatoon Police Service were recorded in the Canadian Register of Arms in June 2007. Information regarding the flag can be found at http://reg.gg.ca/heraldry/pub-reg/project-pic.asp?lang=e&ProjectID=1169&ProjectElementID=4116. The flag is light blue with the SPS badge (as recorded in the Register) centered on the field. The flag is sometimes displayed with an alternating fringe of blue and gold.
Randy Young, 31 October 2015