The logo consisting of the following elements and symbolism: The half maple leaf represents the four participating western Canadian provinces: British Columbia, Alberta, Saskatchewan and Manitoba.

The dark blue ring is the friendly ring of competition that brings the three northern territories and four western provinces together in celebrating young athletes and a variety of cultures.

The colours of the logo also have distinctive meanings.

Nunavut, the North West Territories and Manitoba teams competing at the 2007 Western Canada Summer Games have displayed unique flags and banners. Alberta and Saskatchewan do not have team flags other than their respective provincial flags.
Darrell Neuman, 6 August 2007 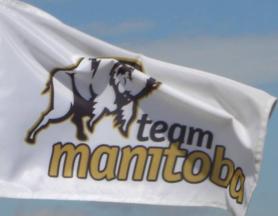