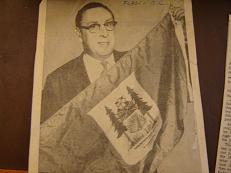 This is a newspaper picture of a government minister (not the Premier) holding the proposed 1959/1960 flag.

According to contemporary newspaper reports from the two main Vancouver newspapers, this was the 1958 Centenary flag reworked.

It shows the shield of BC's arms surmounted by a Dogwood blossom, flanked by two Douglas Firs, and above a landscape with mountains, high-rises, and factories, and this whole mess was on a large white shield on a Blue flag. The newspaper cartoonists and columnists lampooned the design and suggested throwing in even more elements including unfinished highways and railroads, with a Latin motto which supposedly translated "We Apologize for the Inconvenience."

Alistair Fraser [fra94] described the 1958 flag as "a pedestrian design which placed a goulash of shields, dates, letters, factories, trees, mountains, and ocean, upon a blue field."

This proposal proved unpopular, and in 1960 the Banner of Arms was "discovered" by Premier W.A.C. Bennett when he visited the College of Arms in London. He adopted the flag with no debate and little fanfare when he declared that the Arms are "...to be borne.. on flags" etc. and so he claimed that the flag was already the legal flag of BC.
Dean McGee, 17 November 2005

About the 1971 flag Fraser [fra94] writes: 'Of vastly superior design to the 1958 flag, it bore the provincial dogwood flower centred on three golden "C"s, for Canada, Confederation, and Centennial, on a blue field.'
Dean McGee, 17 November 2005