President Joseph Kabila of the Democratic Republic of Congo promulgated a new Congolese post-war constitution on 18 February 2006  which makes provision of a new flag and emblem. During a ceremony at the presidential palace in Kinshasa, February 18, 2006, the Democratic Republic of Congo adopted a new constitution aimed at bringing an end to decades of dictatorship, war and chaos in the vast country, and paving the way for elections by mid-2006. Further links are given at:
http://news.yahoo.com/news?tmpl=story&u=/060218/ids_photos_wl/r2427480279.jpg
http://news.yahoo.com/news?tmpl=story&u=/060218/ids_photos_wl/r2586210504.jpg
http://news.yahoo.com/news?tmpl=story&u=/060218/481/cod10202181822
Manuel Gabino Villascán, 18 Feb 2006

On Jan 26, 2006, I sent to the list a couple of queries about certain emblem used in the jersey of the DR Cong national football team during the African Cup of Nations 2006 football competition held in Egypt (see picture below). 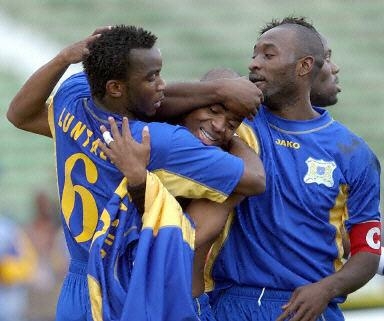 I thought it was the DR Congo national coat of arms since such an emblem had nothing to do with the  FE.CO.FA's (Congolese Football Federation).

Well, allow me to tell you that this is neither the FECOFA's emblem nor the National coat of arms, but a heraldry good-looking mix of national symbols.

The "coat of arms" has the following elements : a blue shield charged with seven yellow stars (like in the previous national flag) one big one in the centre and a row of six stars to dexter (viewer's left). The shield is supported by two golden lions, hence the nickname of the national team: LES SIMBAS. One scroll above the shield reads REPUBLIQUE DEMOCRATIQUE DU CONGO, and another one bellow the shield and lions bears the text: SIMBA, FE.CO.FA. R.D.C.

Two small blue stars bellow the lower scroll stand for the two championships gained by Congo during its history.

I personally give importance to this emblem because from 18 Feb. 2006 the national team is no longer LES SIMBAS (lions) but  THE LEOPARDS; and secondly, because it is neither the FECOFA's emblem nor the national arms, but a beautiful mix of symbols resembles, in some way, the tough transitional period of the DR Congo towards democracy.
Juan Manuel Gabino Villascán, 21 Feb 2006 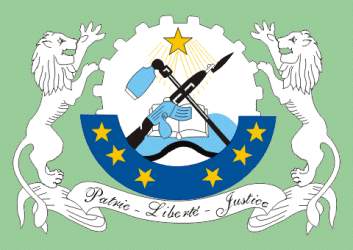 The image shown above is taken from my website. The original image was posted by Jaume Ollé on the Vexillum list on 30 Dec 2001, the source being a postage stamp. However at this webpage  is the text (in French) about the transitional constitution of the Democratic Republic of Congo dated 01 Apr 2003 where it is said that the coat of arms features a lion's head surrounded by two laurels with, in the center, two shaking hands ("Ses armoiries se composent d'une tête de lion encadrée par deux lauriers avec au centre des mains entrecroisées.").
So it seems that the actual coat of arms of the Democratic Republic of Congo is a bit different.
Pascal Gross, 18 Jul 2004

The Senate and the Parliament shall gather very soon in Kinshasa to finally end the so-called Transition. Among the issues raised are the new Constitution, including the national symbols. The symbols chosen by the representatives should later be validated by referendum.
The news appeared in the newspaper from Kinshasa "Le Phare" and was relayed by several press agencies.
Ivan Sache, 20 Jul 2004

The new arms are from out of someone's imagination.  The new constitution mentions something that looks like the Arms from Mobutu's period i.e. a leopard's head with laurel on its left and an ivory defense on its right. But this time they are resting on a rock. The motto is "Justice, Peace, Work". See http://www.presidentrdc.cd/constitution.html (also http://fr.wikisource.org/wiki/Constitution_de_la_R%C3%A9publique_d%C3%A9mocratique_du_Congo#Chapitre_1er_:_De_l.E2.80.99.C3.89tat_et_de_la_Souverainet.C3.A9 or http://www.cei-rdc.org/offres/controleprojet.pdf)
Denis Moyogo Jacquerye, 08 Dec 2005

While in Warsaw last September, I passed several times a small, but elegant villa located on a quiet quite residential street next to my brother's home in the Mokotow district.  This is the residence of the Congolese ambassador and makes me confirm that the arms of 2003 drawn by Jens Pattke are authentic.
They were shown next to the wrought-iron gate of the villa, in gold colour and on the light blue background, in the form of oval plaque with the inscription reading: " Ambassade de la Republique Democratique du Congo en Pologne".   During my almost two-week stay there I never saw a flag hoisted over this embassy, although all other 27 foreign embassies in the vicinity of my hotel nearby were displaying their flags on the daily basis, some (Lithuania and Estonia) together with the flag of the European Union. The reason I wanted to see the Congolese flag was to determine what shade of blue it has.
Chrystian Kretowicz, 09 Dec 2005

From the transitional constitution of the Democratic Republic of Congo dated 1 Apr 2003 (from this pdf-file):
Article 4
The Democratic Republic of Congo shall, within its borders of 30 June 1960, be an independent, sovereign, indivisible, democratic, social and secular State.
Its emblem shall be a sky-blue flag with a large yellow star in the centre and six small yellow stars all of the same size and set longitudinally along the side of the flagpole.
The national anthem shall be "Debout Congolais".
The motto shall be "Democracy, Justice, Unity".
Its currency shall be the "Congo Franc".
Its coat of arms shall consist of a lion's head framed by two laurel branches with hands crossed in the centre.
Jens Pattke, 19 Jul 2004

The Democratic Republic of Congo has adopted new arms but whether Kabila has a new Presidential flag is not known.
Bruce Berry, 16 Aug 1999

Some time ago [tfb] shown a new seal of Dep. Rep. Congo since June 1997 but when I visited embassy of Democratic Rep. Congo in Tokyo the other day, they told me that they still use of coat of arms of Zaire adopted in 1963 since leopard has been the national symbol. They could not show me the official statement of coat of arms after revolution. Which one is right, lion in [tfb] or leopard?
Nozomi Kariyasu, 02 Apr 1999

That is: "Its coat of arms is a lion's head framed by, to the left, a palm-tree branch and an arrow and, to the right, an ivory point [pointer?] and a lance, all of it upon a rock."
This looks pretty much like the Zaire Coat of Arms, only the motto has been exchanged for... a rock - and a leopard for a lion.
Nicolas Rucks, 02 Jul 2000

The coat of arms (e.g. used in the top-left corner of the presidential flag of Zaire). The text is "Justice, Peace, Work".
Marcus Wendel, 16 Aug 1999