The province, then known as Katanga, attempted secession in 1960, only a few days after the Belgian Congo became independent. The rebel government was put down after a war lasting three years. The state of Katanga had its own flag. More recent unrest seems to have been aimed at gaining limited autonomy.  Autonomy was again declared in December 1993, but the government in Kinshasa gave no response. The bid for autonomy was led by the Union of Independent Federalists and Republicans (UFERI).
Jan Oskar Engene

On 11 July 1960, with the connivance of Belgium and the support of Belgian mining and commercial firms, Moise Tshombe, the Katanga leader, took advantage of the breakdown of law and order in the newly independent Congo to declare Katanga an independent state.  Belgian troops were used to disarm and expel Congolese army units from the territory although Belgium did not officially recognise Katanga.  Its main purpose was to insulate the province from the disorder and militant nationalism sweeping the rest of the Congo and safeguard Western investment there.  The Congolese government under Patrice Lumumba called for UN intervention and within a few days a UN force arrived in the country.  Belgian troops were eventually withdrawn from the Congo and Lumumba insisted that UN troops be used to end the secession by Katanga, by force if necessary. Despite continuing unrest in the remainder of the Congo, efforts to resolve the Katanga "crisis" were unsuccessful until the failure of diplomatic efforts led to a further build up of UN troops resulting in the surrender of President Tshombe and his government on 15 January 1963, following which Katanga passed into the control of the UN and central Congolese government.
Bruce Berry, 27 January 2001

This flag is widely used today's by Katanga as a "Provincial" flag (Katanga has an unofficial semi-autonomy status under Kabila's regime).
Jean-Luc Sohier, 19 February 2001


Description of the flag

A friend of mine in Belgium actually had a copy of the official regulations concerning the Katangese flag! His letter notes that the flag was designed by an architect called Louis Dressen. This official flag is very similar to the one that I found printed on a map. That is still the only place I have seen a flag looking like this so obviously the letter of the law was not followed too strictly.
Leif Hellström, 30 Apr 1999

All four arms of the crosses are the same length; these crosses are supposed to represent ingots and those were (crudely) symmetrical. I have been researching Congo and Katanga for some time for an upcoming book and during this research IÆve gone through numerous photos and documents showing the flag or arms of Katanga, and I've also seen a couple of preserved flags. Hence my knowledge on this subject.
Leif Hellström, 19 Apr 1999

The flag was designed by my Godfather, Mr Louis Dressen. He was born in Bielefeld (Germany) and moved to Liège (Belgium). After a while in Zanzibar as manager of a Belgian bank, he settled in Katanga in 1925.  He was formerly the manager of Banque du Congo Belge in Elisabethville.  Although a businessman (Les Bureaux Modernes, Carrières de la Karavia, Plantations de Dilolo, ...) and architect, he designed many city maps and the armorial bearings of Elisabethville ("ex imis ad culmina") and of local schools (Institut Marie-José, Collège Saint François de Sales). His wife (92) is still living in Liège (Belgium).  Louis Dressen died in Lubumbashi (formerly Elisabethville) in 1972.
Pierre Dressen, 20 Aug 2003


Meaning of the Couped Saltires

The couped saltires in the flag of Katanga were intended to represent copper bars. Katanga is in the copper belt of southern Africa.
William M. Grimes-Wyatt, 09 May 1996

The couped saltires are a kind of money. In central Africa, from Congo to Zambia and Zimbabwe, copper has been cast into cross-shaped bars for trade. Those Katanga (or Baluba) crosses came up in various sizes, from a couple of centimetres to nearly half a metre in diameter.
Harald Müller, 10 May 1996

The saltires/crosses on the flag were called "croisettes" in Katanga. Their heraldic use is prior to the State of Katanga as they were used in the arms of the Katanga Province of the former Belgian Congo and the City of Elisabethville (now Lubumbashi), the capital of Katanga.
The arms of Katanga Province were: "vert with three croisettes copper"; as far as I remember the croisettes were always represented as saltires in this case.
The arms of Elisabethville and, with a slight modification, of Lubumbashi today, were: "Silver with a gules chevron, accompanied by three gules croisettes" (with, on the chevron, a silver crowned E letter for Elisabethville and just L for Lubumbashi). In this case, the croisettes were always crosses. I join an extract of the 1954 patent letter given to Elisabetville. Note that in these letter the croisettes are described as "Katangese monetary croisettes" ("croisettes monetaires katangaises") but not as saltires or crosses; on the included drawing, they are designed as crosses.
Currently, the croisettes were red saltires on most part of the Katangese flags. I remember to have seen sometimes croisettes as crosses on the flag, but never they were copper. They were also in form of saltires for other uses (by instance as rank marks for officers in Army or as marking on military vehicles).
Jean-Luc Sohier, 19 February 2001

The motto of Katanga was "Power, Hope and Peace in Prosperity" ("Force, espoir et Paix dans la Prosperite") and the components of the flag represent it: Red for Power, Green for Hope, White for Peace and the croisettes for Prosperity.
Jean-Luc Sohier, 19 Feb 2001


Variations of the flag

In practice many variations of the flag were used, even officially on letterheads etc., including: The variations are hardly surprising given the state of affairs which the country was in.  One can assume that if the state lasted longer and obtained some stability, the standardization of the flag design would have followed.
Željko Heimer, 26 Apr 1999

Based on a fresh look through my files I can provide the following info, based on the perhaps 15-20 illustrations of actual flags or representations of flags I found:

From a map of the capital Elisabethville (now Lumbumbashi). This has red crosses with tapering arms of equal length and width, rounded ends upper cross between the lower two.
Leif Hellström and Željko Heimer, 26 Apr 1999


Variant #3 (Saltires instead of crosses)

A flag used by a Katangese military unit has red saltires, with arms of equal length and width and rounded ends. This image is one of the most representative of how the flags looked in practice.
Leif Hellström, 26 Apr 1999

I collect banknotes and the last banknote of 10 Francs "produced" by the Republic of Katanga in 1962, but never used (end of independence), shows the national flag. The crosses are in the form of saltires (x) and not as (+); which I believe was based on the official flag of the republic
Marc Lasserre, 17 May 2002

I think the Katanga crosses should be red, although one sometimes one sees them in copper brown. The proportions are 2:3 [Not according to the official regulation, but indeed used in most depictions.] .
Harald Müller, 10 May 1996

This image was made from a real Katanga flag from the Bruce BerryÆs collection. That flag clearly showed the crosses with one arm longer then others.
Željko Heimer, 11 Jan and 26 Apr 1999

I found an image of a Katangese coin of 5 francs showing this kind of cross.
Jarig Bakker, 31 Mar 1999

This small flag [with hoist at the right hand of the viewer Ś Ed.] shows yet another variation on the theme.
Leif Hellström, 30 Apr 1999 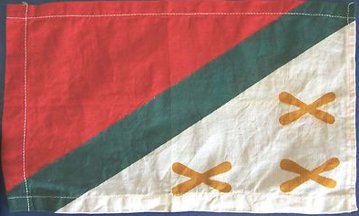 This is a very rare flag, brought home by a Canadian Signals Corps soldier who was in the Congo in the 1960's has been put on eBay for auction.

When Congo declared independence from Belgium in 1960, the state of Katanga declared itself independent of Congo, leading to a 3 year conflict between the two states. Katanga was mineral rich, economically run by White Europeans and anti Communist so they decided to maintain at least some of their European ties by becoming a separate republic.  This design is similar to Variant 5 outlined above. The copper coloured X's on the flag represent cross shaped copper tokens of old currency, traditionally used in this copper rich area of Africa. This portion of the flag represents prosperity.

This flag would have been made by the rebel government to bolster it's image.  At 10" wide, I thought it might have been a staff car flag but the military used red crosses on it's flags and not copper saltires.
William Garrison, 02 May 2012 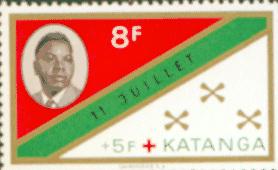 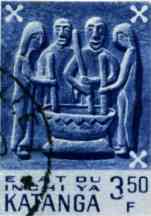 On checking my Katangese stamps, I find that the drawings of the croisettes on the various flag images are fairly accurate. However, it might still be helpful for you to have the two illustrations I've prepared of the two stamp designs. For one thing, they confirm that the saltire conformation was the one preferred by this short-lived state. Yvert Stamp-Catalogue #57 and #54.
Mike Oettle, 02 Jan 2002