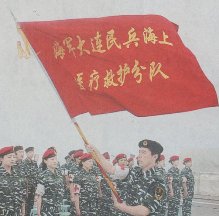 Is there any information in the caption of the photograph?
Peter Hans van den Muijzenberg, 21 April 2015

The caption translates as "Walk across the river, a horse length ahead. Photo: Zhu Wei."
(You might have noticed that I did not bother to reply to this thread until now. As far as I am concerned this is not an official military flag, but simply one of those slogan banners much used in Communist Chinese propaganda.)
Miles Li, 25 May 2015

Finally the mysterious text issue has been solved. Actually this kind of flag was (or something has been) very popular and frequently used in the former Communist countries.
Zoltan Horvath, 25 May 2015

That doesn't bring us much further either, regarding the people involved. But at least now we know that it doesn't.
It would seem quite relevant to know that Communist Chinese propaganda uses a lot of slogan banners, and whether or not all of the photographs on this page fall in that category.
Peter Hans van den Muijzenberg, 25 May 2015

Also agree with Peter Hans on this one as well. It seems these are "promotional banners" (to say the least) and maybe (or maybe not) are commercially available. Which leads me to another example: Iran has also another "inspirational banner" which is not of official use but its use is widespread, such as the Ya Hussein flag. And here's another example where a "motivational (or promotional) flag" is in use, this time, in the Colombian Army, where for a publicity campaign to promote the core values of the Army, they created this flag called "Fé en la causa".
I would even think that these flags evolved from merely decoration banners, into esprit-de-corps (if I'm allowed to call them that) banners, as we can see them today in this three cases for instance.
So, as obvious as it might be, we can see several other cases in other countries where this types of flags do exist and are recurrent, so the discussion is worth at least so other readers are aware of what they actually are and what they actually stando for.
Esteban Rivera, 25 May 2015