Tubará is a municipality in Department of Atlantico, Colombia. It was founded on 18 March 1533.
The flag of Tubará is horizontal divided: upper stripe is blue and bottom stripe is diveded into white and green. In the center of the flag there is an white (bordered black) oval and inside it there is what looks like an ancient (indigenous?) symbol and below it the name of the municipality.
Source: municipal web site.
Dov Gutterman and Felipe Carillo, 2 August 2008

Translated from municipal web site:
"White means purity and peace expressed by the inhabitants of Tubará.
Green means aspiration to a better future, the woods and mountains that surrounds our village.
Blue represents the resources of the ocean that borders our territory."
Ivan Sache, 10 August 2008 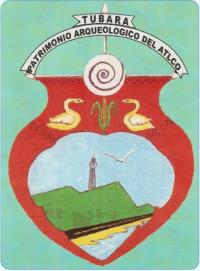