Taminango is a municipality in the Nariño Department. It became a municipality by ordinance no. 4 of 19 January 1886.
The flag of Taminango is diagonally divided (bottom hoist to upper fly) green-red with yellow stripe at the border. In the canton, there is a pre-Columbian paint of the Quiriquinga, a sacred Inca bird.
Source: municipal web site
Dov Gutterman and Felipe Carrillo, 12 August 2008

Translated from municipal web site:
"Designer: Ramiro Jurado.
The flag used as its institutional symbol by the municipal administration of Taminango is made of three coloured fields arranged as follows:
- Green (upper triangle) symbolizes faith, elation, hope in the future and aspiration to progress of the villagers;
- Yellow (Ascending diagonal stripe) symbolizes the resources of the region and the human warmth characteristic of the villagers;
- Red (lower triangle) symbolizes strength, value, courage, dignity and wisdom characteristic of the villagers' personality.
Quiriquinga, the Incas' sacred bird, represented after a Pre-Colombian painting, is placed in canton, symbolizing the greatness of the villagers."
Quiriquinga is sometimes written Qoriquenke.
Ivan Sache, 30 August 2008 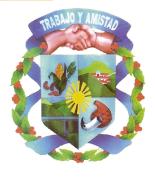