I found this site of the mayor office of Ibague, Tolima, Colombia at <www.alcaldiadeibague.gov.co>. I could not find any description of the Coat of Arms but there is a nice picture of one.
Carlos Thompson, 20 March 2003

According to the official website of the Government of the City of Ibagué at <www.alcaldiadeibague.gov.co>, the flag is based on the flag of the United Provinces of New Granada.
E.R., 8 January 2008

Today during the inauguration of the Governor of the Department of Tolima and its capital Ibagué, one can see their respective sashes, which are the same colors of the flags with their respective Coats of Arms, as seen here. (Governor of Tolima on the left and Mayor of Ibagué on the right )
(Source: http://www.elespectador.com/impreso/temadeldia/articulo-319250-frenar-crisis-fiscal)
Esteban Rivera, 02 January 2012 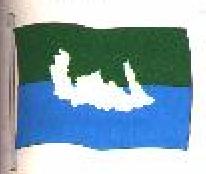 In several cities in Colombia, the city is divided in "comunas" (sing. "comuna") and they are internally refered by number (and sometimes a name too).  The country-side of the municipality would be divided in "veredas" (sing. "vereda").
Carlos Thompson, 14 March 2003

Ibague have administrative division into 14 Comunas. It is the same as a District.
Felipe Carrillo, 13 March 2003