Here is the image of the flag from the municipal website.
Dov Gutterman, 21 March 2004

The Canton of Santa Ana (34,507 inhabitants in August 2001; 6,142 ha) was created by Law #8 of 29 August 1907, by secession from the Canton of Escazú. It is named after the "Hacienda Santa Ana" (St. Ann Estate), founded in 1658 and owned by Mrs. Ana Retes, and divided into the six Districts of Santa Ana, Salitral, Pozos, Uruca, Piedades and Brasil.
The flag of Santa Ana, adopted by the Municipal Council on 22 April 1987, is horizontally divided green-yellow-pink with the municipal coat of arms in the middle.
Green represents the fields, trees and agricultural products of the canton, especially vegetables, the main product of Santa Ana being onions.
Yellow represents the sun, whose intensity yielded to Santa Ana the nicknames of Sun Valley ("Valle del Sol").
Pink is the colour of the canton's tree, the "roble sabana".
The (unheraldic) coat of arms of Santa Ana was designed in 1971. It depicts a rural landscape made of a valley crossed by a path  heading to a hill planted with a "roble sabana" tree; on the right of the shield is a peasant working with a shovel. The shield is surmonted by a golden crown, itself surmonted by a blue scroll bearing the name of the canton in black letters. The shield is surrounded by two coffee branches, tied below the shield by a knot from which hangs a blue scroll bearing the foundation year of the canton, 1907, in black letters. Below the blue scroll, a larger red scroll bears the writing "Corporación Municipal"  (writing not shown on the image).
The "roble sabana" (lit., "the prairie oak"),  Tabebuli rosea (Bertol.) DC., Family Bignoniaceae, is common from southern Mexico to Venezuela and coastal Ecuador. Its wood, used in general construction, for furniture etc. is similar to oak, therefore the name of "roble" ("oak") given to the tree. See a short monography on the tree by E.M. Flores & W.A. Marín at <www.rngr.net>.
Source: Municipal website, symbols' page.
Ivan Sache, 16 February 2008 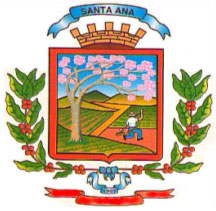