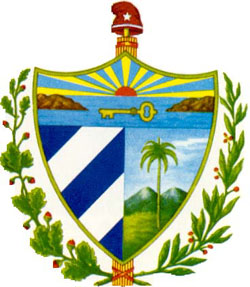 I got additional information from Embassy in Tokyo. coat of arms was adopted on 24 April 1906.
Nozomi Kariyasu , 13 November 1999

The official description of the coat of arms is the following:
"The National coat of arms represents our island. It is shaped like a pointed leather shield, and divided into three sections. In its horizontal upper part, there is a golden key between two mountains, and a sun rising over the sea - which symbolises the position of Cuba in the Gulf, between the two Americas, amidst the emergence of a new state. The blue and white stripes, down the left hand side, represent the situation of the island, in terms of its division into states, in the colonial period. Down the right hand side, a Cuban country scene is dominated by a royal palm tree - the symbol of the ubreakable character of the Cuban people."
The royal palm is the Cuba National Tree: "The National Tree: La Palma Real (The Royal Palm). Although it's present all over the Caribbean, it's everywhere at the Cuban country side. It's a source of wood and materials for rural construction, the same for hats, oil and other elements for the tobacco industry.  Because of its erect figure, bearing any difficult storm, it's the most respected, symbolizing the strong character of the Cuban people."
The National Flower is not related to the national symbols, but has some historical value: "The National Flower: La Mariposa Blanca (The White Butterfly), an endemic jasmine used by Cuban women during the independece war to transmit messages among the rebel forces. It's a symbol of purity, fight and independence. It grows in humid places, like river shores and lagoons. It could also be cultivated in gardens and backyards."
The National Bird, however, is flag-related: "The National Bird: El Tocororo (Priotelus temnurus). An endemic bird similar to a Quetzal, reproduces in its feathers the colors of the National Flag: red, blue and white. It's a symbol of freedom, because inside a cage it dies."
Source: Website of the Cuban embassy in Canada.
Ivan Sache, 13 August 2002

The description on the coat of arms is expanded on the "Symbols of the Cuban Nation" website, as follows:
"The aforementioned National Coat of Arms represents the Island of Cuba. It is formed by two archs of similar circles which cut backing their concavity one to the other, like a heart-shaped ogive, and is divided in three bodies, spaces or fields. Cuba, as the key of the Gulf of Mexico, the union of the Cubans, the sun of liberty, the colors of the flag and a typical Cuban landscape are present in the coat of arms. A red Phrygian cap, emblem from the French Revolution, pointing to the right in its upper part, appears in its design This cap had been used by men who got freedom in ancient times. In its central part appears a five-pointed white star, one of them ponting up, and, just like the flag, it represents the independent state.
The Coat of Arms is hold by a bunch of eleven sticks tied by a red ribbon , x-crossed, meaning union, because strength is in it . The upper horizonal field represents a sea, with two capes, mountains or land points, which symbolizes the position of Cuba between the two Americas and the rising of a new nation.
A golden rod key placed in a blue sea closes the strait. At the bottom, a raising sun spreads its rays all over he sky, remembering the place of Cuba: “The Key of the New World”, the link between America and Europe and North and South America, as well as the shining rise of the new-born state.
In its lower left field appears a rural landscape, green and mountain site, with a blue and clear sky, symbolizing our environment, plain and natural, presided by a palm tree, a royal palm, the typical Cuban tree, with its central leave bud pointing up, emblem of the straight character of the Cuban people.
Its lower right field has five same width stripes, alternating dark blue and white and bending from right to left, and associated to the flag. These blue and white stripes symbolize the department division of the island under Spanish colonialism.
Not exceeding its height, the National Coat of Arms of Cuba, is ornated by a laurel branch at its left representin strength, and an oak branch at its right representing victory."
We say here that the coat of arms was adopted in 1906, but the "Symbols of the Cuban Nation" website says: "The National Coat of Arms is inspired on the one designed by poet Miguel Teurbe Tolón, under the ideas by Narciso López for the National Flag. The present day Coat of Arms differs something from the one originally made in 1849 as a sketch to La Verdad newspaper, directed by Teurbe in New York and used by López to seal official documents and bonds issued by him, as provisional Chief of State of Cuba, between 1850 and 1851. Its present-day design was officialy approved by the Assembly of Guáimaro, when the Republic of Cuba was created. According to Law No. 42 it is a Symbol of the Nation."
The website shows different graphic representations of the coat of arms at <www.nacion.cult.cu/opcescudo.htm>.
Ivan Sache, 11 February 2007 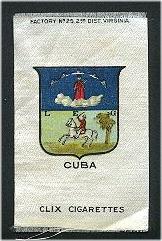 I found a nice tobacco silk (Clix Cigarettes) with a shield labeled Cuba. have any information on this?
Chris Kleinfelter, 7 August 2000

On <www.autentico.org> it seems to me that they refer to the 'authentical revolution of 1933'; several links have been provided with a coat of arms-like image, which I interpret as the old Cuban coat of arms.
Jarig Bakker, 20 December 1999