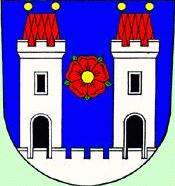 In the middle ages, Kaplice was evidently using a stamp from the emblem of the local aristocracy, the lords of Pořešín, with two crossing reeds. Beginning around the 16th century the town began to use the symbol of castle walls with two towers with a
five-petaled rose between them as a stamp as well as seal. This symbol, without any kind of confirmation or approval, ended up being distorted over time in various ways. In order to remove the distortions and firmly set the form of the seal, the citizenry of Kaplice decided to return the symbol to its original form which had been established in 1655. In November of 1968 the local plenum of a national committee approved the seal's final adjustment. Present population: 7.000.
Description :
In the lower part of a blue shield is a silver castle wall with an eight-shadowed battlement, behind which stand out two silver four-sided towers, each with red doors and a window, and with a three-shadowed battlement. Above it is a red roof with gold
poppies. Between the towers is a red five-petaled Rosenberg rose with a golden center and green calixtine leaves.
Information from this site.
Jarig Bakker, 10 Nov 2001