The Czech web page "Mesta a obce online" ("Towns and communities online") shows that the Velešín flag should be blue, yellow and white. This is the coloration more compatible with the coat of arms than the blue, white, black. According to the Velešín vicemayor, Mr. Dalibor Janak, the city flag is indeed horizontal blue-yellow-white.
Jan Zrzavy, 28 May 2001

Petr Exner asked me to inform you about the true Velešín flag. In May 1999, the city office of Velešín proposed the horizontal tricolore yellow-white-blue, but the parliamentary heraldic-vexillological subcomittee rejected this proposal because of duplicity. In October 1999, another proposal was sent to the Parliament - horizontal tricolore blue-yellow-white - and was approved. Officially, Velešín received its flag in November 26, 1999.
Jan Zrzavy, 30 May 2001

The first written mention of the town is from 1266. In meander of Malše river, on high bill, was established castle by king Přemysl Otakar II. Together with castle arose settlement on opposite bank of Malše of which gradually formed the town. The castle and settlement were given to Čéč of Budějovice by Přemysl Otakar as compensation for his loss of Budějovice. In 1266 it went to Benešov of Markvartice, in 1391 was granted town status, and in 1387 sold to Ulrich II. von Rosenberg. During the Hussite Wars in 1433 Velešín was conquered and occupied by Hussite hetman Čapek of Sána. In 1611 the owners became the lords of Švamberk, and in 1620 given by the emperor to the Buquoys. The settlement was on the so-called Cáhlov trade route leading to Freistadt, but its significance decreased upon the construction of the horse-drawn railway in the early 19th century. In addition to agriculture, the village also prospered through handicrafts - between 1568 and 1705 guilds of tailors, weavers, ironsmiths, wheel-makers, joiners, cobblers, butchers, and bakers all either were formed or joined.
The name Velešín was originally derived from the proper name of the owners, as it meant the court of Veleš. This word was used later to refer to the royal castle and newly founded settlement in its shadow, even though it no longer reflected actual ownership.
In Latin texts: Welleschina, Wellessin
In German texts: Weleschin
Information from the Česky Krumlov website.
Jarig Bakker, 20 Aug 2002 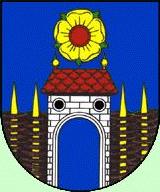 Town Seal : History :
It isn't known when Velešín acquired a seal, although the oldest stamp is from the 16th century.
Description :
On a blue shield stands an opened silver stone gate with two rotund embrasures above the gate and with a low red roof with gold poppies. On both sides of the gate are palisades weaved with brown birch around two gold pointed posts. Above the gate is a gold five-petaled rose with a red center and green calixtine leaves.
Information from the Česky Krumlov website.
Jarig Bakker, 20 Aug 2002

The Botswana-like flag of Velešín, reported by Vexillolognet remains mysterious but it is not the city flag.
Jan Zrzavy, 30 May 2001