Image after Petr Exner's Vexilologický Lexikon prapory obcí ČR (1995) - Tábor city, Tábor district, South Bohemian region - adopted 9 May 1995.
The flag of Tábor Town (District centre): Red over black, in the centrea Bohemian Lion rampant (white, not silver), holding the yelow chalice,which is surmounted by a white ball, charged with black crosslet (eucharisticbread). It is a symbol of the free royal city (the lion) with Hussite past(colours, chalice and bread). In its "socialist" past the National Commiteeflied the slightly changed Hussite banner (black field with red bordureand the red chalice in the canton).
Note: in the socialist era ruled the idea, that the Arms are only ahistorical residue, because there was no municipal self-government. TheState theory has spoken on the State Administration (Statni sprava), andState Power ( or Authotity, Might  - Statni moc) respectively. Sothe National Commitees were only a kind of state authority.
Aleš Křižan, 14 Dec 2000 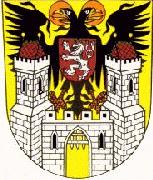 image from thissite, spotted by Jarig Bakker, 22 May 2001

The "old" Tábor flag is quite right, because the picture is from thebook"Klíč k našim městům", Práce publishers, Prague 1979. It wasnever adopted officialy (only in use).
Aleš Křižan, 24 Apr 2001

Tabor: during the Czech national revival in XIX century, some were veryproud of the Hussite movement (in XV century) that was at that time feltpredominantly as anti-German nationalist uprising. As Tabor was one ofthe radical Hussite centers, Tabor citizens have fabled something theyconsider the true Hussite revolutionary flag. However, the flag had nothingin common with Tabor COA and I don't know whether it has been officialat any time. So, the flag is rather political than municipal, I feel.
Jan Zrzavy, 15 May 2001