Podium and Decorative Banners of the Third Reich (Germany)

Pomp and Ceremony were near and dear to the NSDAP and the Third Reich. Because of this there was a huge variety of flags designed for use on podiums, balconies, and walls at their NSDAP party rallies and national ceremonies. The use of German eagles and swastikas on a red field for flags and large banners by the Third Reich was a fairly common element used on generic decorations. These were for decoration without any specific meaning. This page contains examples that were typical for these decorative flags and banners.
Pete Loeser, January 2012

Examples of Banners with Swastika designs

These generic designs would be hung from building rooftops, balconies, walls and podiums. Size depended upon use, from small podium sizes to huge outdoor uses. A common element of their design for indoor use was they usually had gold or silver borders and fringes on the bottom edge, while the large outdoor ones were more commonly fringeless and elongated into narrow long banners. 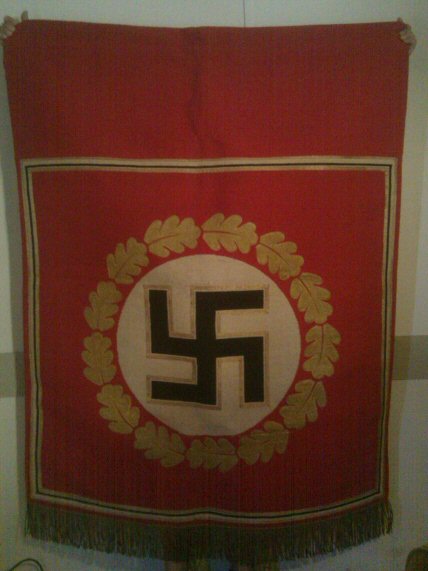 I received an inquiry about this. It's a podium banner, but I don't know the significance of the oak leaves. Military? SS? Ornamental? I suspect not the last; do you know?
Albert S. Kirsch, 1 January 2013

As you know there were a lot of different podium banners in use during the Nazi-period in Germany. The oak leaves on this one had no special significance. They were purely ornamental and in this case would emphasize the "importance" of the swastika symbol. A typical user of these kind of flags would have been an Amtsleiter, a kind of office leader of the NSDAP-party in a small German town, who intended to make a speech. Another user could have been a mayor of a town. These flags were especially used by party leaders or civil authorities as podium banners, not by military or SS units. A military speaker would have used the Reichskriegsflagge, a SS speaker a black flag with SS-runes on it.
Pete Loeser and Fornax, 10 January 2013

Examples of Banners with Eagle and Swastika designs

A common design element was the use of a black, silver, or golden eagle reminiscent of Imperial times with the NSDAP swastika worked into the design.

Questions about these generic designs?

I did a quick matrix of the banners found so far. [Questions Asked:]

Examples of Other NSDAP Banner designs

(Notice that)...the same pattern of the rune-like designs are shown, but in a different color scheme. Could it be the banner of some German State which uses the three white runes on a violet background?
Esteban Rivera, 7 August 2011

I'm not sure why just four of them. I seems to me like large scale events in Germany at that time had dozens of banners designs, so this one probably has them too. But you know the drill: Which of the multiple flags in each of the pictures are we after? Do we know the occasion, or at least the location? Would anyone hazard a guess at a description?
Peter Hans van den Muijzenberg, 16 February 2012

I noticed that on the Historischer Verein f³r Mittelbaden e.V./Mitgliedergruppe Schiltach (Historical Association for Media/Group Member Schiltach) website, if my old eyes don't deceive me, that those strange three "red rune-like" shields on some of these Nazi pennants look a lot like...(those of) the town of Schiltach, Germany, although I think we are missing a horse or three? At Wikipedia they also show the same three shields.
Pete Loeser, 27 March 2012

That's surprising, the three inescutcheons in Germany normally are the emblem of the guild of painters and paperhangers. I wasn't aware, that there was also a city using this emblem. So, I checked Schiltach in STADLER, vol.8 (1971), p.92. The three inescutcheons had been the arms of the Dukes of Urslingen (rulers of Schiltach just from 1371 to 1380). They also had been entitled to call themselves Dukes of Spoleto (Italy). As the kin died out in 1444, it is queer to find their banner in an NS-film. My wife spent part of her youth in Schiltach, and there is no magnificent building like that one showed in film near the city. So in the end the painters and paperhangers might be the better choice. (Note: The information given in STADLER is probably also available on Ralf Harteminks webpage.)
Klaus-Michael Schneider, 27-28 March 2012 (two messages combined)

Adolph had been a paperhanger. So maybe there is a connection there? Just saying----
Craig Valentine, 28 March 2012

Yes, Schiltach uses arms with shields. They probably originally kept those for not having other arms to use, but they now keep them for the canting element: Schilt-ach. Had I known you were after the flag with the three shields, I would have mentioned that three shields is the emblem of Saint Luke, patron of painters.
Hitler worked as a painter of water-colours for a while, often depicting buildings. Apparently, this fact got garbled in the retelling, to the point where he was understood to have been painting the walls of houses. Saint Luke is the patron of both types of painter, though, but I doubt anyone would have used the symbol on a flag for Hitler's sake, now that he found a new job.)
Could there have been an event related to the arts? Do we know more about where and what the occasion of the photograph(s) was?
Reichsbanner Schwarz-Rot-Gold, was the centre militia, in reaction to the RFB on the left and the SA and others on the right. For those who do not understand the scale of these events: These organisations each had several million members. IIRC, at the height of the German internal strife, something like on average one in three Germans was a member of one of these organisations.     After the Reichstag Fire, not Nazi-friendly militia were quickly banned. On the whole I doubt that a Reichsbanner Schwarz-Rot-Gold cloth and a Nazi banner would be directly related.
Peter Hans van den Muijzenberg, 28 March 2012 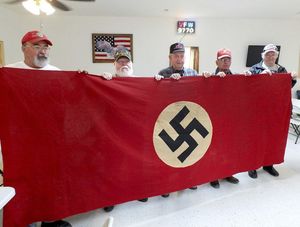 This NSDAP banner was discovered about five years ago when the old Brownstown Veterans of Foreign Wars Post (Brownstown, Illinois, USA) was being cleaned out prior to being knocked down for reconstruction of a new building finished this year. The old building had served as the local post since World War II veterans bought it in 1951. It was found neatly folded up in an old filing cabinet, and mistakenly believed to be an old red table cloth. A little research revealed that the Nazi banner had been captured in April 1945 by a group of American soldiers. All the soldiers wrote their names and hometowns on the flag in black ink. One of them, Earl Johnson, likely brought the flag back to Brownstown. Johnson joined Brownstown's VFW Post after it began in 1948. The Brownstown Post now wants to sell the flag to help pay for the recent construction of its new building, but so far the organization has received two somewhat underwhelming offers.
Sources: American Vexillum Magazine - Saturday, 21 March 2015 and The Effingham Daily News
Pete Loeser, 22 March 2015