The East Berlin (German Democratic Republic) flag after 1945 was the same that in use previously, but after 7th November 1956 another design (without official regulation) came into use.
Jaume Ollé, 17 May 1998 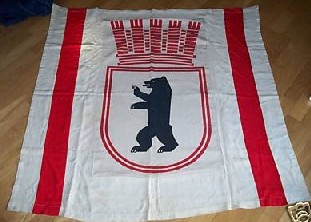 This image (reduced) shows a vertical East Berlin hanging flag having the same pattern as the rectangular version. As item no. 130264442172 on German eBay (end 31 Oct 2008), it was put up by “kiepenkarl” who calls it a “balcony flag” and speculates about the time frame – no worry, as the shifted red stripes (running parallel to the flag’s longer edges rather than bordering it) point to the GDR.
We learn that the material is cotton with sewn-on vertical stripes whereas the emblem (shield, crown) is printed on linen, then sewn on. Small holes near the top indicate how the flag was mounted.
Jan Mertens, 9 Jan 2010 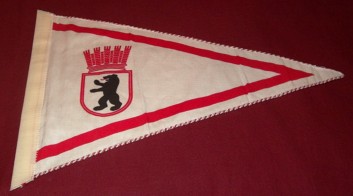 One of the links Marcus sent us some time ago leads to a pennant clearly related to East Berlin, or “Berlin Capital of the GDR” as this part of the city was officially called by the GDR regime: White field with red stripe parallel to the edges (except at the hoist) and the city coat of arms – East German version – near the hoist.    The same pennant may be seen here (second photo showing a restored bus).
The question is, how official was this pennant?  Was it a tolerated or prescribed variant, meant for which use?
Jan Mertens, 27 Dec 2008