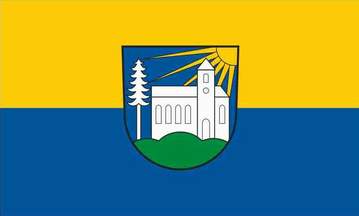 It is a yellow-blue horizontal bicolour with centred arms.
Source: this online catalogue
Klaus-Michael Schneider, 25 Nov 2019

Shield Azure, on a triple mount Vert a church Argent, flanked by a fir Argent at dexter, issuant from the upper sinister corner a radiant sun Or.
Meaning:
Mount and fir are alluding to the location in the Black Forest (Schwarzwald). The sun is alluding to the fact that sun rises early and keeps many hours a day. A church already appeared on local seals from the 19th century.
Source: Landeskundliches Informationssystem Baden-Württemberg
Klaus-Michael Schneider, 25 Nov 2019