On 1 January 2007 the Subcounties (Ämter of Amrum and Föhr-Land merged with the city of Wyk auf Föhr forming the new subcounty of Föhr-Amrum [Frisian: Feer-Oomraam]. Wyk auf Föhr is the capital of the subcounty.
Klaus-Michael Schneider, 18 Nov 2012

It is more or less an armourial flag. The figures of the coat of arms are superimposing the sheet, which is yellow over green with a blue wavy line in a white field at the bottom edge of the sheet.
Klaus-Michael Schneider, 16 Nov 2012 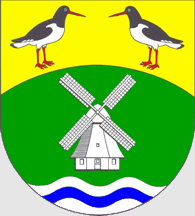 The shield has a base of silver (=white) and blue waves. At the bottom of a golden (= yellow) field stands a green hill, superimposed by a silver (= white) windmill. Above are two oystercatchers in natural colour, facing one another.
Meaning:
Wrixum is located on Föhr Island. It belongs to the marshes in the north and to the moraines in the south. This is symbolised by the colours green and yellow, while yellow, red and blue are the colours of Northern Frisia. The wavy lines are symbolising the North Sea. The hill is symbolising the location on an island. The windmill is a local landmark. The oystercatchers are an endemic species.
Source: Municipal Roll of Arms Sckeswig-Holstein Online

Flag and coat of arms were approved on 12 May 2005. The artist is Uwe Nagel from Bergenhusen.
Klaus-Michael Schneider, 16 Nov 2012

The birds on the flag of Wrixum look like oystercatchers. I don't recall having seen this bird on any flag, one more species to add to the vexillological zoo.
Pascal Gross, 31 Mar 2006

Yes, the birds are oystercratchers (Austernfischer). It is the characteristic bird of the Wrixumer Marsch on the island of Föhr.
Jörg Majewski, 1 Apr 2006

In my village the bird was known as "bûnte liuw" - multicoloured as the Frisian cattle, but where they got the lion from is far beyond me. It is a typical bird of the Waddenzee, extending from Noord-Holland (Netherlands) to southern Denmark; every year hundreds of thousands of these birds visit this sea, and again - precious few oysters to be caught there...
Jarig Bakker, 1 Apr 2006

The local Southern African variety of the oyster catcher, known in Afrikaans as the Tobie, is all black with red legs and beak and, not surprisingly, known in English as the black oyster catcher. This little bird lays its eggs on the bare sand of the beaches of the Western and Southern Cape Provinces and is credited with changing environmental legislation. It is listed in the Red Data book as being near extinction because of human interference with its breeding habits. There is (or were) here a class of yokels who delighted in invading the beaches with their 4x4's and beach buggies and racing around on the sand without regard to the local wild life. This eventually caused such an uproar among the environmentalists that Parliament passed legislation banning all such vehicles from the beaches except at specified places. It is reported that in the past four years since the law came into effect, several more breeding pairs have been spotted.
Andries Burgers, 2 Apr 2006

Thanks to the oystercatcher and via the cows, we can reconcile France, Friesland and Holstein. The oystercatcher is called in French "huîtrier-pie".
An "huître" is an oyster; the circonflex accent on the i recalls the s from the Latin "ostrea", the Greek "ostreon" and the ancient French "huistre". The word "huitrier" is a very uncommon synonym of "ostréiculteur", oyster-farmer, and its main use is for the bird. The word was coined by Buffon in his "Histoire naturelle des oiseaux", as follows:
"On a aussi donné à cet huîtrier ou mangeur d'huîtres le nom de pie de mer, non seulement à cause de son plumage noir et blanc, mais encore parce qu'il fait, comme la pie, un bruit ou cri continuel, surtout lorsqu'il est en troupe; ce cri aigre et court est répété sans cesse en repos et en volant."
"This oystercatcher or oyster eater was also called sea magpie, not only because of its black and white feathers, but also because; like the magpie, it is continuously calling, especially when in group; this sharp and short call is relentlessly repeated either at rest or in flight."
A "pie" is a magpie and also the black and white colour of an animal fur. After having scoured the French coasts for decades, the Frisians became good fellows and cattle breeders and provided France with a holly cow called Française Frisonne Pie Noire, based on Frisian stock introduced in France in the XVIIIth century. Originally known as Hollandaise Pie Noire, the cow was renamed Française Frisonne Pie Noire in 1903 in order to please Jarig's ancestors. However, in 1990, the ungrateful French breeders renamed the cow Prim' Holstein because of the introgression of American Holstein stock (with, of course, remote origin in European Holstein). The Prim' Holstein is today the most milk-producive and most commonly found cow in France. The Bretonne Pie Noire cow, known in the past as Morbihannaise or Cornouailles, or "the poor's cow", has been progressivelty absorbed by the Frisonne and the Normande and is close to extinction. I have not found any evidence of a relationship between the cow and the Breton flag.
The oystercatchers that nest in France are sedentary. In August and September, several Dutch and British birds join the local population for overwintering (so do more and more humans).
Ivan Sache, 29 Apr 2006

Wyk auf Föhr is the largest town on the island of Föhr, the second largest in the North Frisian Islands on the German coast of the North Sea. It is one of the most important centres of tourism in Schleswig-Holstein. About 4,500 inhabitants live on the island, but during the tourist seasons 20,000 or more people visit the island. Wyk provides shopping centeres, health services, post office, and is the seat of government for island of Föhr and the other nearby islands. Wyk's major source of income is obviously the tourism. Having one of Germany's most beautiful seaside promenades called the Sandwall, Wyk is a popular spa location. The first seaside spa in Wyk auf Föhr was established in 1819 making it the oldest of its type in Schleswig-Holstein. The Danish King Christian VIII chose Wyk as his summer resort, and the famous poet Hans Christian Andersen visited and enjoyed Wyk's beaches.

It is a horizontal 5-stripes flag, blue over yellow over red over yellow over blue with ratio 4:3:50:3:4. Ship and star from the coat of arms are in the red stripe and shifted to the hoist. The Municipal Role of Arms of Schleswig-Holstein however displays the flag with ratio nearly 1:2.
Source: Stefan Schwoon's database
Klaus-Michael Schneider, 16 Nov 2012

This variant displays the ship in the middle of the red stripe and has different ratio.
Pete Loeser, 6 June 2020 It is a red shield. A golden (=yellow) wrecked sailing ship topped by a 6-point star of the same colour is drifting on blue waves.
Meaning:
In 1704, Wyk was granted the rights of a seaport by the Danish monarchy. The ship is taken from a seal, which had been approved in 1706, when Wyk gained the rights of a market town. It shows a wrecked ship together with the inscription "Incertum quo fata ferunt" (Engl.: "Ambiguous, where fate will lead us"). The ship is symbolising the dangers of shipping, which had a great importance for the locals. They earned their living by whaling. The star was added later as a symbol of hope in a world of obstacles. In Wyk in 1819 the 2nd German North Sea Spa was established. The rank of a city was gained in 1910.
Source: Reißmann 1997 , p.376

Flag and coat of arms were approved on 29 June 1956. The artist is Wilhelm Horst Lippert from Brunsbüttel.
Klaus-Michael Schneider, 16 Nov 2012 and Pete Loeser, 6 June 2020