This flag is identified as a Prussian NCO's lance pennant and is now located on the Prussian Cavalry Regimental Standards and Guidons page.

I found this flag on a poster in the German consulate of Guangzhou/PR China. I only know, that it was about a competition about environment.
J. Patrick Fischer, 29 Apr 2003

This flag is identified as Das Corps Thuringia Studentenverbindung and located on the German Students' Associations page.

Flag on a Grosz Painting

flag detail
"The Pillars Of Society" by George Grosz

I have found a flag which I have been unable to indentify. It appears in the 1926 painting "The Pillars Of Society" by George Grosz (a German Expressionist artist). It looks very similar to the North German Confederation / German Empire flag 1867-1918 except in the middle of the white stripe, it has a black stripe which extends from the left side to about the middle of the flag.
Kieran Ball, 19 Jun 2003

This could be the Naval Reserve Ensign (flown by merchant vessels commanded by Naval Reserve officers). It was a horizontal black-white-red tricolour with an Iron Cross at the hoist.
Miles Li, 19 Jun 2003

In yesterday's newspaper (Süddeutsche Zeitung 1 Sep 2003, p. 39) there was a photo of a demonstration here in Munich (mainly organised by the Green party and its youth organization), pleading for the legalization of Cannabis-Hemp. The photo showed an interesting flag: on a field of interwoven green hemp leaves on white, a red disk with a bigger green hemp leave. Anybody knows this flag (inscription is "hemp", so I guess it might have appeared in some English-speaking countries).
Marcus Schmöger, 2 Sep 2003

This flag is a version of the Hemp Flag.
Peter Hans van den Muijzenberg, 4 June 2011

This photo was taken in october 1932 in the Berlin Reichstag. The occasion was the commemoration in 1932 of the 50th Anniversary of the founding of the German Colonial Association (Deutscher Kolonialverein - DKV). (See German Colonial Society for more information)

I spotted this car-sticker on 3 April 2006 in Hamburg-Farmsen. It is a blue pennant with a thin yellow border and two white chevrons pointing to the fly. It most likely belongs to a yacht club.
Klaus-Michael Schneider, 27 Feb 2009

It is the burgee of Wassersportgemeinschaft Arnis/Grödersby e.V. - However there is some difference from my speculative image sent in 2009. The border was yellow, but had obviously faded from red to yellow on that car sticker. What is worse, I obviously painted the chevrons in wrong direction (I painted them from memory as I had no photographic evidence at the time). The actual pennant it turns out is blue with a thin red border and separated by two white chevrons pointing to the hoist. (source)
Klaus-Michael Schneider, 24 Dec 2020

This flag is identified as the AV Flag - New Jersey Bund and located on the German American Bund 1936-1941 page. 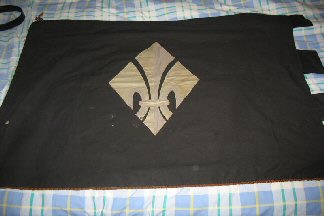 I recently discovered this flag at a small auction house in Australia and I am trying to establish where it came from. I think it is WW1 era, and the horse represents the house of Hannover? With the crown of the king? Allegedly the flag was captured by Australian forces? I've attached some photo's and would love any information you might have?
Matthew Brown, 29 Oct 2009

This surely cannot possibly be anything to do with the Kingdom of Hannover, which was abolished and absorbed into the kingdom of Prussia in, I believe, 1867 or thereabouts.
Peter Johnson, 31 Oct 2009

The horse might be from Braunschweig (Brunswick) as well. The figure in the upper hoist corner obviously is a "th"-rune. And looking at the reverse, the fleur de lis often is used by scout associations. But don't ask me which one.
Klaus-Michael Schneider, 4 June 2011

The Hanoverian flag, if it is that, has a rather old style of the horse, where it has a ground. I think this was used when Hanover was not yet a kingdom. The crown, however is not an elector's cap. Would that make the bearer's Hannoverians from the Electorate, but in England where their lord was king? The rune is also sometimes used to represent H, though others use it to represent W. I don't know whether that's a regional or temporal difference, or neither. Anyway, it raises the question of when people used runes on flags. It's position has a quality of unit emblem or number over it, hasn't it?
Peter Hans van den Muijzenberg, 4 June 2011

Some remarks about this flag Let’s start from the reverse. It shows the emblem of the Deutscher Pfadfinderbund (DPB) as it can be seen on their homepage. Deutscher Pfadfinderbund means German Scouts Movement and was founded in 1945 shortly after WWII. The emblem is called the Rautenlilie (diamond lily). A modified version, together with a three-leaf clover (called Klilie, which could be translated into "clily") is used by the Bund der Pfadfinderinnen und Pfadfinder (BdP), another German scouts association: Therefore, we have definitely a German scout’s banner. But which tribe?
This is the tricky question of the obverse. Firstly, we have the coat of arms of the Kingdom of Hannover used between 1837 (the year when the personal union between the ruling houses of Hannover and Great Britain came to end, as Victoria became queen in London and the Kingdom of Hannover did not allow a female succession of the throne) and the 1866 coat of arms (when Prussia incorporated Hannover). The "steed of Saxony" is still used (without ground) in the coat of arms and flag of the state of Lower Saxony and was used in the short lived Land Hannover (23rd, Aug to 23rd Nov, 1946, then merged with others [Land Oldenburg, flag slightly different to the former Grand Duchy Land Schaumburg-Lippe flag and Brunswick flag: also - with other versions of Oldenburg and Schaumburg-Lippe - to Lower Saxony) and in the British Occupation Zone of Germany.
The version "steed on ground" can still be found on the flag of the Welfenbund (Guelph Movement), strong supporters of the Guelph houses of Hannover and Brunswick, especially to the House of Hannover. This movement came into being already in the 19th century as an opposition to Prussia. Their political/parliamentarian arm was the Deutsch-Hannoversche Partei, shortly named Welfenpartei (Guelph Party). Under the pressure of the Nazi Government the party terminated themselves in 1933.
In the late 40s and the early 50s of the 20th Century the Guelph Movement and others requested a re-installation of the Land Hannover, but without any success. In my opinion the flag has to be embed in this tradition: a Lower Saxony Scout’s tribe of that time probably called by themselves as "Guelph tribe". Especially the non-denominational German scout organisations had and still have some "Viking traditions", expressed e. g. in symbols or names of their divisions. Some examples and some pennants can be found at the bpd homepage. The Thurisaz rune on the left probably stands therefore, too. It symbolizes inner strength, facing the faith, and selflessness.
I am afraid the flag cannot be backtracked to its origin. However, I forwarded the pictures to the DPB board. Perhaps they find out more.
Werner Bußmann, 13 December 2011