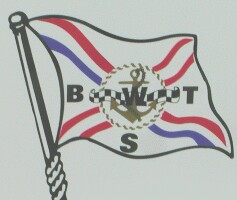 Flag of an other Berliner ship companie which offers city tours on the river Spree.
Information on this company on this site.
Dominique Cureau, 2 May 2006

Reederei Bethke - not a member of Reederverband Berlin - is yet another tourist shipping company active in the Berlin area operating from Tegeler See which is a lake.
See company homepage in German (house flag shown as drawing):
Mentioned in passing in a video on this site, the Bethke family has been active in tourist shipping for more than thirty years. Offered are straightforward trips on the local rivers and lakes - to Potsdam, for instance - as well as theme excursions such as Easter, Mothers' Day, American Cruise, Italian or Bavarian Night, etc. Only one ship, 'Berlin' - but a large one at that - is operated.
A real house flag (again accompanied by a 'G' signal flag beneath) is prominently shown on one of the photos on this page, relating a trip by a gathering of rough diamonds here. Photo in question about two thirds down, horizontally divided green-white-green-white-green bearing a large black serifed initial 'B' in the centre, three stripes high. Back to the homepage - see following Windows Media video (flags of Bethke and Berlin flying on bow): here

image by Eugene Ipavec,
The name 'Markus Bethke' being mentioned on the site may explain in part a completely different flag shown twice in the following document.
Horizontally divided blue-white-blue, black initials 'MB' (without serifs) in the white stripe somewhat shifted to the right by a yellow anchor in the hoist, slanting somewhat and trailing a yellow chain passing underneath the initials on the lower blue stripe; on the upper blue stripe, placed above the initials, are three yellow four-pointed stars the central one of which is larger than the others.
The green-and white flag is consistently shown on (or concerning) the ship so could the blue-and-white one be the owner's personal flag? (And the tale is not quite finished here as this particular Bethke is, Triebler-like, not the only one around!)
Jan Mertens, 20 Jul 2007

Indeed, there is also 'Reederei Simone Bethke' established at Berlin as well. Active since 1970, the company offers the usual city (Berlin) and environment (River Havel area) tourist trips, see company site (in German only): here. This particular Bethke operates three ships namely ASTOR (largest of all, the others are quite smaller), HAVELPERLE and BÄRLINCHEN', presented here.
It is clear now that last time I foisted the ASTOR on Reederei Bethke tout court, see the rough diamonds outing again: here Both companies apparently fly the same house flag - see following pictures: here and here
What we gain in clarity is somewhat offset by the use of 'Reederei Bethke/Prause' as a company nam, perhaps no longer in use? Additional confirmation of house flag: click Bethke Fahrplan 2007 as evidenced by the huge drawing on p. 1 with a rather small 'B' however - but we have the photos.
To end, one drawing was found showing an 'M.B.' variant advertised as belonging to "Prause und Bethke" but to my feeling representing Markus Bethke. Faintly visible, the words 'seit (i.e. since) 1970' are added to this flagoid in white! Clearly there has been a split or amicable division but I do not know the details. In any case we have two Bethkes in operation; let us hope more evidence of flag use, differentiated or not, will show up in future.
Source: this site
Jan Mertens, 26 Jul 2007 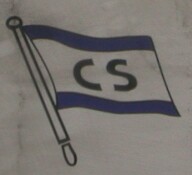 An other Berliner companie of ship: City Schiffahrt H.G. Gabriel, see Company website.
Nota: This society have connexions with Berliner-Wassertaxi.
Dominique Cureau, 3 May 2006 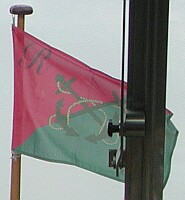 Always in the same subject of berliner tourism boat, the houseflag of Reederei D. Hadynski, see Company website.
There is a H in the green part of flag behind the bar.
Dominique Cureau, 3 May 2006

[As its names says it, I guess that this company is not restricted to the Spree but sails also on the Havel.]
Jan Mertens found the company website, but he seems to have missed the house flag there... What is (relatively) worse is that the flag shown on the website differs from the one sent by Jan Patrick by having the letter SHS instead of HS and skewed to the hoist instead of centered.
Ivan Sache, 29 May 2007

Here is a third version of the house flag of Spree und Havelschifffahrt, with the letters SHS placed vertically in the middle of the flag.
Anything else? :-) There are several other ways to arranges the letters SHS on a flag!
Ivan Sache, 19 Apr 2006

The ships of Stern und Kreis have also a yellow-blue vertical striped flag below their house flag.
Dominique Cureau, 25 Apr 2006

Former appearance in our mailing list:
See first this website, showing two white flags, crossed, the one in front bearing a red initial 'T' in a circle, red as well; the other, a red five-pointed star. (posted 17 Nov 2003)
J. Patrick Fischer sent a drawing of the current blue pennant, tapering and truncated, bearing a black-and-white five-pointed star on an orange disk. This was followed by Dominique Cureau's reply the next day concerning a photo of said pennant with an additional flag vertically striped blue-yellow. (24/25 Apr 2006)
A large image of current star see on the company website. Most ships of the fleet are shown flying the blue pennant on the bow.
Some highlights from the history section ("Unser Unternehmen" then "Geschichte"): 'Spree-Havel-Dampfschiffahrt Gesellschaft Stern' (i.e. Spree and Havel - local rivers, jm - Steam Shipping Co. "Star") founded in 1888, rapidly expanding. 1903, 'Teltower Kreisschiffahrt' is founded, I take this to mean "Teltow District Shipping" (there is a pun on 'circle' and in any case there we have our 'T'). Link to document showing the starred house flag of 'Stern': here
Hard times after WW1, ships are sold. In 1934 'Stern' is obliged to terminate business: the company exploiting the Teltow Canal takes over and founds 'Stern and Kreisschiffahrt der Teltowkanal AG'. In 1938 the new company owns almost sixty vessels of various kinds.
WW2 causes substantial losses as ships are destroyed or impounded - one single vessel remains in business. The eleven ships being under East Berlin control in 1961, when the Berlin Wall is built, are lost to the company. The following decades new vessels are built, the most unusual being MOBY DICK, very like a whale!
1992, in the wake of German reunification, sees a reversal of fortune: the ‚Weisse Flotte' ("White Fleet"" vessels stationed in Berlin are taken over and a new firm, ‚Stern und Kreisschiffahrt GmbH' is founded. In 1999 the Hegemann Group takes control. In 2006 the fleet comprised 33 ships.
To resume, we may rightly interpret the two flags of the 1937 brochure as the original house flags - then shown (and also flown?) together - but between these and the blue truncated pennant I believe another flag was used. I could be mistaken but it seems to be flying on the HAVEL QUEEN, to be seen here. Said flag - flown on the bow as seen on a photo - was rectangular, white, and bore a different star-and-circle emblem. See this brochure: here black 5-point star, the points slightly jutting over a red circle placed behind it.
Jan Mertens, 1 Jun 2007

This page really leads to the homepage proper (partly still under construction): As listed on the Berlin tourist shipping association's website, Hartmut Triebler operates two ships, ROLAND VON BERLIN, discovering Berlin, and BEROLINA, discovering ten lakes in the vicinity of Berlin.
The house flag is clearly related to the others mentioned: white field with green saltire, in the centre a red steering wheel (parts of saltire left out where they normally ought to show up) and red initials - without serifs - 'H' and 'T' flanking the wheel.
The 'Startseite' page (left menu) shows this flag flying on the bow of BEROLINA plus, beneath it, the yellow-and-blue vertically striped flag already pointed out by Dominique Cureau. (For some reason the 'G' signal flag plays a role in this context.) The single webpage mentioned earlier also shows this flag in use, on both vessels.
Jan Mertens, 14 Jul 2007

Besides Hartmut Triebler (and some other family members listed using the same url) there is Werner Triebler (see below), flying a variant flag. But that is for another occasion, as I have a little theory that at first there was the one "Reederei Triebler" i.e. before a supposed split-up.

If I am allowed to drag in German eBay once again - item no. 280114838531 offered by "samusa007", end 24 May 2007, is a picture post card showing the vessel BEROLINA owned by "Reederei Triebler Berlin". We know the flag's pattern but here only two (black) initials appear, 'R' and 'T'. As the Hartmut Triebler flag will show, this is in fact an archivexillum!

Let me present the Werner Triebler tourist shipping company, established in Berlin, Germany. Firm’s website: W. Triebler is active April-October and has a number of interesting routes to offer, just click ‘Fahrplan’ (sailing schedule) in the left column and discover Berlin and its many lakes and waterways.
From the ‘Über uns’ (about us) section we learn that the firm – a family business – was established in 1961, active in the (West) Berlin area, and that it extended its range of operations to the surrounding Land of Brandenburg in 1990.
The house flag:  On a white field is a green saltire, bearing a red steering wheel in the centre (the saltire is not visible through its spokes) and accompanied by black letters’R’ (hoist), ‘W’ (top) and ‘T’ (fly).
Jan Mertens, 23 Apr 2006

I've been to Berlin the last week and saw a lot of flags there. Sometimes it was not easy to make a picture, so I took a photo of some signs.
There were a lot of ship companies, which offers city tours on the river Spree in Berlin. There flags are in use at the ships and the company sign:
J. Patrick Fischer, 14 Apr 2006