Hansa Treuhand Schiffbeteiligungs-AG & cO. KG, located at Ballindamm, Hamburg: It is a white flag with a blue canton, containing a white cross patty. Two blue lines, one coming from the hoist, are forming a wave in the flag's fly end.
The SeaCloud II shipping company and Hansa Hamburg Shipping International GmbH & Co. KG are parts of this holding.
Source: I spotted this flag on 13 July 2008 at Ballindamm, Hamburg.
Klaus-Michael Schneider, 17 September 2008 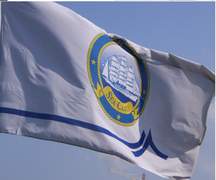 SEA CLOUD is the name of a luxury sailing cruise liner but probably also the name of a company maintaining the ship. And probably the company belongs to Hansa Treuhand, because 1) both flags are hoisted upon the same building at Ballindamm, Hamburg, and 2) the flag is derived from that one of Hansa Treuhand.
The flag is a white with a blue wave in the lower half. In the centre is a disc, containing an image of the SEA CLOUD in white upon a celestial blue background using a gradient fill. The disc is surrounded by a blue ring, flanked by two yellowish ropes. Upon the top of the ring is a compass rose, upon the ring are also three yellow 5-point stars, and the bottom of the ring is superimposed by a yellow ribbon with black inscription "SEA CLOUD".
Source: I spotted this flag at Alster-Lake Hamburg on 30 March 2007.
Klaus-Michael Schneider, 24 Apr 2009