The 聭Bundesverband der Deutschen Binnenschiffahrt e. V.聮 (聞Federal Union of German Inland Navigation聯) or BDB, in short 聳 is a non-profit organization, which aims to further the interests of all involved parties: private persons, firms, authorities of any kind including Land and federal governments, industry, labour unions, and various bodies such as the Central Commission for Navigation on the Rhine.   Seat: Duisburg, with website.
Should you want to know more about this subject, the site (in German only) offers a number of reports and papers, gives full details of its structure and the various technical committees; details the area covered i.e. the German waterways; shows the differences between sorts of vessels; discusses loads; offers links to related entities and member firms I聮m only too happy to explore!
In short, BDB wants to defend inland navigation as a serious and competitive means of transportation. The flag is held in Czech style, a black over red horizontal bicolour plus a white triangle at the hoist. The bear of the city of Berlin is in the centre of the triangle.Shifted to the hoist is a yellow stearing wheel in the black stripe and a yellow anchor in the red stripe. Between bear, wheel and anchor yellow initials "BVB" ordered vertically are distributed to the three parts. In the flyend a livesaver in white and red with black initials "BVB" in the white sections is superimposing both, the black and the red stripe.
Source: I spotted this flag at Billwerder Bucht in Hamburg on 9 July 2007
Klaus-Michael Schneider, 20 Jul 2012

We know this Bremen (DE) based inland shippers' association for a number of house flags displayed on their "Schiffermast". Only presenting the large association pennant or flag now (not the banner) - more on this venerable association soon.
Pennant, in the cloth and as a drawing respectively, at the top of the "Schiffermast"聺: here
As could be expected, Ingrid Schulze's verse next to the photo are flag related
Schiffer fährst Du nach Bremen, schau Dir den Schiffermast an,
Solltest Dir Zeit daf眉r nehmen, Erinnerungen hängen daran.
Lustig flattern die Flaggen im Wind, finden halt in Wanten und Leinen,
Gespielen der Wetterwolken sie sind, flüstern von weiten Reisen.
Der Mast am Tiefer, unser Symbol, stolz reckt er sich in den Himmel.
Er grü脽t euch alle, drum Schiffer fahr沤 wohl, durch raue Wellengetümmel
See FOTW-ws for its model, Bremen's characteristic red & white ("bacon"聺)
The main difference of course is the triangular format. Also the name appears in black letters in a white space "Binnenschifferverein Bremen e.V."聺 (these initials identify a non-profit organization). Said "space" taking up the central two stripes, would be a rectangle but for the rounded lower corners...perhaps suggesting a hull. Come to think of it, the term "聺cartouche"聺聺 implies an enclosing line (border) but there isn't any.
Jan Mertens, 5 Aug 2010 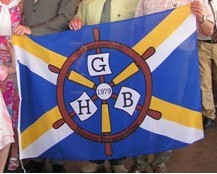 This is not a firm 聳 rather it is a local German shippers聮 (bargemen聮s) society: 聭Gemeinschaft Harener Binnenschiffer聮 i.e. Society of Haren Shippers. We already know the source, the website dedicated to the inland vessel 聭Aviso II聮; Select 聭Schiffstaufe聮 (top of page), then have a look at clickable photos, fifth of row 6 and first of row 7 (bottom row) from which this image was taken (stern copyright notices on this website聟).

This beautiful but complicated flag is obviously inspired by the Haren/Ems arms. Blue with a yellow-above-white saltire, its centre bears a brown steering wheel inside of which said saltire does not appear; rather, three white sails placed 1 and 2 bearing black initials 聭G聮 (top) and 聭H聮 plus 聭B聮 (bottom) are put in front of three spokes.  Three other spokes appearing between the sails bear a kind of yellow sleeve while the central knob of the steering wheel is white with the year 聭1979聮 (rendered in blue?).
With other local and nautically minded organizations, the GHB promotes the local shipping museum (German only), or helps instruct first aid volunteers (page 1 聯Seminare in Haren聰, German only), and is otherwise engaged in defending its members聮 rights and interests.  It should be said that shipping has long been 聳 and still is 聳 a traditional pursuit in and around Haren/Ems.
Jan Mertens, 24 Oct 2006

Let us say it was in the air - a version of the Mannheim city flag as flown by the Mannheimer Schiffahrtsverein von 1894 eV. i.e. the non-profit Mannheim Shipping Association of 1894. Flag is presented onthis webpage (German only).
So, attachment < de~masv.gif > features the defaced municipal flag: horizontally divided blue, white, and red, a large white canton - two stripes high - containing a very thin black saltire accompanied by initials: "M." (top), "S." (left), "V." (right) and year "1894" (bottom), all black.
The first photo on the following page partly shows the real thing here Highlights from the history section ('Geschichte', upper menu): 'Internationaler Mannheimer Schiffahrtsverein' (i.e. International Mannheim Shipping Ass.) founded in 1894, renamed 'Mannheimer Schifferverein von 1894' (i.e. Mannheim Bargemen - or Shippers' - Association) in 1911, current name adopted in 1975.
Much model work done during the 'sixties and 'seventies for the local shipping museum, culminating in the acquisition and renovation of river paddle steamer 'MAINZ'.
Interest in shipping law fostered by a separate society leads to the creation of a specialized chair at Mannheim University. Supporting two local schools for bargemens' children and initiating harbour outings; keeping the 1868 Mannheim Convention, establishing free shipping on the Rhine, before the public eye. 28 of 175 members actually sail. English text of the 1868 Mannheim Convention, in hindsight an important stepping stone towards European integration can be found here
Jan Mertens, 9 Jun 2011

As announced, another interesting flag found on the following photo will be presented: It is the centre one in the back, immediately behind the improvised altar. See this page for a bit of inland shipping history and explanation of the flag (in German): Briefly, the entity in question 聳 VBW or 聭Verein für europäische Binnenschiffahrt und Wasserstrassen聮 is a non-profit organization based in Duisburg-Ruhrort.  The name means 聯Organization for European Inland Navigation and Waterways聰. Founded in 1977 as the result of a merger between the 聭Zentral-Verein für deutsche Binnenschiffahrt聮 (Central Organization for German Inland Navigation), founded in 1869, and the 聭Verein zur Wahrung der Rheinschiffahrtsinteressen聮 (Organization for the Defence of Rhine Shipping Interests), founded in 1877 聳 these, too, being non-profit.

The VBW's aim is the promotion of inland navigation in the widest sense thanks to cooperation of all actors including other means of transport.
The Satzung (call it the Rules) of the VBW is reproduced on above page and some interesting flag details are given, but the main thing of course is 搂 2 i.e. the VBW聮s 聭Vereinsflagge聮 or organizational flag (I translate): "rectangular, with a diagonal deep-blue cross (saltire, jm), gold-coloured steering wheel and anchor in the centre plus a gold-coloured motto "In the Name of God" on the remaining white fields".
The text specifies that the motto is meant to symbolize an age-old shipping tradition observed on the beginning of a journey (such as tolling a bell three times, jm).  On the accompanying picture, the words are hardly rendered in gold but the above photo shows them.
搂 5.2 specifies that a meritorious plaque in the form of an oval plaque surrounded by the words 聞EUROPÄISCHE BINNENSCHIFFFAHRT UND WASSERSTRASSEN聯 can be awarded, as decided by a general assembly.  搂 8 b) 2. mentions the existence of an honorary council, established for purposes of representation and promotion, of which all 聯bearers of the 聭Vereinsflagge聮 are among the members.
See the following history page showing the plaque's precursor (coloured picture at the end), explaining that it was established in 1924 (at that time, centred on Rhenan interests only) as an award and also the house flag; that same year, it was awarded for the first time.(By the way, how many famous companies are represented by the men in the painting: Stinnes, Braunkohle, Rhenania, Haniel, Fendel聟).
See also here: This picture is clickable 聳 giving all the details 聳 and is presented as a 聭Fahrflagge聮 i.e. flag for use on vessels; measures 100 by 150 cm and costs 75.00 聙.   The table flags are much cheaper, of course: You will no doubt have seen the europeanized VBW logo on that website.  Let us hope it will never be put on a flag and replace the venerable 聭Vereinsflagge聮!
Jan Mertens, 28 May 2006